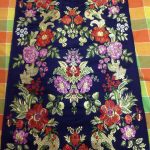 Sethi, Ritu
KEYWORDS YOUR VIEWS
The landmark Colonial and Indian Exhibition of 1886 showcased the best resources and products from over 33 British dominions. Inaugurated by Queen Victoria it received over 5.5 million visitors – an unprecedented record for an exhibition. The  comprehensive catalogue that accompanied the  exhibition while describing the magnificent array displayed at the Indian pavilion   contained these cryptic words “3 pieces of the Benaras Kinkhabs or cloth of gold brocades call  for no special remarks….” Going  on to say “…but (they) command attention as the most effective of all the fabrics shown.” Elaborating further they described the fabrics as “the gorgeous and beautiful Kinkhabs and gold brocades from the looms of the holy Banaras” Kashi, Banaras, Varanasi - the many names of one of the oldest inhabited  cities of the world whose textile links have been and remain an interinsic part of the city.  From the c. 2nd century B.C when Patanjal, the great grammarian in his text Mahabhasya mentions kasika textiles as being more precious than others to references in ancient Buddhist and Jain literary sources that mention Kashi as an important weaving and trading centre, the glimpses continue through the ages. The principle history of Mahmud of Gazni, Tarikh –us –Subuktigin by Baihaqiin written in the 10th century listed the textiles of Banaras as one of the prized plunders of his raids. Kabir the great weaver-mystic poet lived and...

The Changing Face of Traditional Puppetry