Thangka, in Tibetan, is literally a ‘flat painting’ on a scroll or wall. What is commonly understood as a thangka is a painted, embroidered, or woven banner hung in a monastery or at the family altar and carried by lamas in ceremonial processions. Characteristic of creative expression in Tibetan Buddhism, they are done in multiple colours or, sometimes, in golden outline on a dark background. The iconometry used conforms generally to that prescribed around the mid-15th century by the great art theoretician Manthangpa.
Thangkas are usually painted on sized cotton or linen (rarely on silk), with water-soluble natural dyes, tempered with a herb and glue solution. The technique is similar to tempera painting (which uses pigments mixed with size, casein, or egg, instead of oil) and its recorded use goes back at least to the 3rd century. The most common shape is the upright rectangle (square for a mandala). In the last stage of a painting, the eyes of the deities are painted as part of an elaborate ‘eye opening’ consecration ritual, after which it is mounted on silk, often woven with dragon, snake, or lotus motifs symbolising the sphere of cosmic waters. A protective fine silk curtain is added finally.
Depicting appropriate themes, thangkas are objects of religious devotion, aids to meditation and contemplative invocation, and sources of miraculous power. They are also, occasionally, commissioned to commemorate events or for certain purposes such as propitiation or expiation, or to offer to a monastery. Common subjects include scenes from the Tibetan tradition which has 500 lives of the Buddha, depictions of reincarnations (the serene white Tara as the Chinese queen of the 7th century ruler Songsten Gampo, and the fierce green Tara as his Nepali one), deities admitted to the Buddhist fold (Mitra becoming Maitreya, Indra becoming Vajrapani), and gods of protection, often in union with their consorts. In addition to the basic Vajrayana deities of Indian origin, there are more than 500 deities of Tibetan conception. Biographical paintings of the historical Buddha, the two supreme goddesses Prajnaparamita and Tara, a pantheon of bodhisattvas (enlightened beings who renounce Buddhahood in compassion for living creatures who require help — the bodhisattva Avalokiteshwara or Chenrezi is the patron saint of Tibet), other divinities including bird and animal ones, Tibetan and Indian saints, Tibetan kings, mandalas or spheres of divine residence of various deities, and epic heroes are also featured, as are the representations of flowers, medicinal herbs, and other worldly subjects.
The tradition of thangka art was introduced into Tibet from eastern India in the 7th century and, influenced by Central Asian, Kashmiri, Nepali, and Chinese contributions, evolved, by about A.D. 1430, into a distinctive style of celestial motifs and exuberant colours. The painted images are essentially embodiments of ideas and not an idealisation of facts. They are to a viewer what diagrams are to a mathematician. Artists translated mystical visions of monks into pictorial forms within a code. The posture of the body and the number and positioning of its parts, along with the implements, the vehicle, the seat, and the colours, were documented in detail, as were descriptions of the mandalas.
A growing interest in thangkas outside of the Tibetan community is beginning to move them out of their tradition religious and cultural context and, while themes and iconometry still conform to classical tradition, colours are being adapted to suit varied tastes. 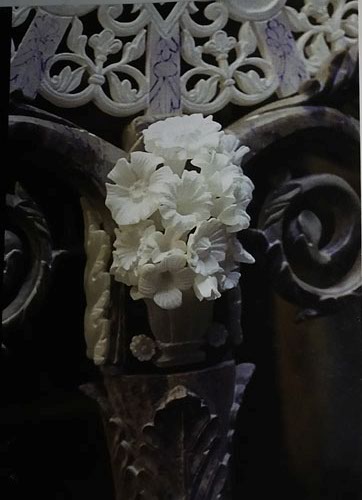