Madhuban, in the Himalayan foothills of Mithila, is the home of the Madhubani paintings. Traditionally, on festive and religious occasions, and during social celebrations, the women of Mithila decorated their homes and courtyards with images that were vibrant, colourful, and deeply religious. The subjects of these paintings were gods and goddesses, mythology and nature. The women use rich earthy colours — reds, yellows, indigoes, and blues — in their lyrical paintings of gods and goddesses like Rama-Sita, Krishna-Radha, and Shiva-Gauri. These were intended for shrines and in the khovar, the innermost chamber of the house where the bride and bridegroom began their married lives. The women used basic materials like gum, thread, and matchsticks or fine bamboo slivers wrapped in cotton to execute these wonderfully eloquent paintings.
The women passed on this traditional art form to their daughters over generations and this art is still alive and thriving. During a severe drought in the 1960s in the normally fertile region of Mithila, the people of Mithila were forced to look at something other than agriculture as a source of income. They got the women of Mithila to execute their art on paper and cloth, and today Madhubani is one of the most popular works of folk art all over the world. The themes and techniques used for the painting are still the same. The canvas has changed from walls and floors to cloth and paper and papier mache.
On auspicious occasions, and at festivals, marriages, and births, women paint aripan and dhuli chitras or dust paintings on the mud floors of their huts. Geometrical and highly stylised, these paintings are open astrological charts, a storehouse of the wisdom of the ages. Folk paintings are done by a community of tribesmen called the chitrakars, in the Santhal Parganas,. They paint scrolls in the traditional manner, depicting stories and moral lessons. They carry the scroll paintings from one Santhal village to another and sing the story, for which they receive some remuneration. 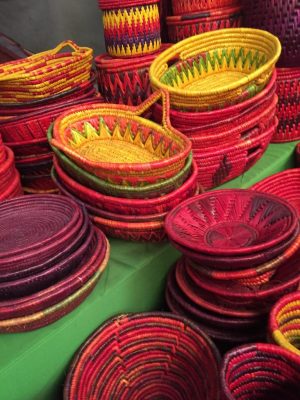