An indigenous tradition of metal-crafts has existed in Pakistam since time immemorial. The use of copper and its alloys by the Indus Valley culture is proved by the discovery of numerous well-made utensils at Mohenjo Daro and Harappa. Not only were metals and alloys used to make implements like axes, hooks, chisels, etc., and utensils, like pots, salvers, and goblets, the technique of casting sculptural figures also was known. The eight-inch statuette described as the Mohenjo Daro dancing girl and the fragment of a foot with anklet – both in bronze – continue to be mentioned as outstanding examples of Indus Valley metal-craft in all studies of ancient art.

The metals most widely used during the Mughal period were copper and iron.

ARMS AND ARMOUR
The field that attracted the greatest attention was the production of armour. The craftsmen of Wazirabad built up a reputation for making excellent daggers and knives and those in the nearby town of Nizamabad became known for quality swords. Various designs and motifs were engraved on the blades and handles of swords and daggers and these were often inlaid with silver or gold. The availability of iron ore at Khuzdar helped the rise of indigenous iron-crafts in Balochistan. At the turn of the century blacksmiths in the Yusufzai belt of the Frontier region were reputed for their reliable craftsmanship. A great deal of old armour – swords, shields, daggers, carbines, cannons, coats of arms, and helmets – has survived but the experts are yet to separate the pieces produced by local craftsmen from those imported from Golconda or Iran.

With the advent of the British the metal-crafts suffered. For instance, the Nizamabad sword-makers were forced to be content with producing knives and scissors, that too for those who could not afford imports from Sheffield. The Frontier iron-smiths retreated into tribal hideouts to develop their skill in making guns which were often sold as manufactured in Europe.

Although brass is still not favoured as a material for cooking vessels, the alloy is increasingly being used by craftsmen to produce functional-cum-decorative objects in large numbers. The decoration may consist of engraved or embossed designs. The art of minakari, patterns made with enamel, has again become very popular. A large body of objects has stones set in different patterns. Of lat brass lamps have reappeared all over the country. The design varies from simple cylinders to conical forms with richly ornamented tops and foundations.

Another distinct school of engraving and enamelling is called Moradabadi which is being continued in Pakistan by craftsmen who migrated from Uttar Pradesh in India. Two types of engraving are common. In one, called naqqashi (sketching), patterns are etched with a steel point. In the other, called khudahi (scraping), the ground is scraped and the pattern left to stand out. Moradabadi craftsmen make decorations in golden colour on a surface made white by tin polishing. Enamelling is also a feature of Moradabadi ware. But of late the craft of enamelling has been taken up by other schools as well. In the process patterns are engraved and then lac is poured into the grooves.

The possibilities of making decoration pieces of metal have also attracted a large number of amateur craftsmen. They are experimenting not only with sculptural forms in different metals but also with scraping and chasing new designs on copper and brass. They are also encouraged to design diverse utility objects – like lamp-stands, tin containers of iron strips woven like mats, and jars.

Brass work of NWFP, Pakistan
Peshawar is the capital of NWFP. It is one of the historical cities of Pakistan. Brass work is on the top of all handicrafts of Peshawar. Brass work is done on many things like household utensils of daily use to decoration pieces. In Hindko (one of the much spoken languages in NWFP), brass is called as “Mis,” and the individuals who work on this metal are called “Misgar.” In Peshawar a big market is allocated for this handicraft, known as, “Misgaran Bazaar,” that means, bazaar of brass workers. People of NWFP, especially Peshawarites give household utensils to their daughters in “Dowry,” that are made of brass and are beautifully carved. These include water storage and cooking utensils.

While the non-Muslims of South Asia continued to use brass utensils the Muslims invariably chose copper as they thought brass was a base material, impure and unhygienic. To guard against poisoning by copper sulphate they had cooking and water vessels periodically plated with tin, which kept a large number of qalaigar busy. Peshwar and Lahore developed into major centres of coppersmiths craft quite early.

IRON SMITHY
The use of iron ranged from making horse-shoes to weapons. Even the humblest household needed a few kitchen articles made of iron, like tongs and blower and tawa (convex plate for baking bread). Karahis (half-circle pans) were made in different sizes for boiling milk, frying cookies and preparing sweets. Centuries ago gypsy tribes developed a special skill in producing such simple implements in their tents and huts. The village blacksmith concentrated on making plough blades, sickles, shovels, chains, bars, door joint, nails, Persian wheels, stirrups etc. An idea of the blacksmiths importance to the village community can be had from the fact that he was paid at a higher scale than the goldsmith and the carpenter.

SILVERWARE
Today, because of its prohibitive cost, gold is rarely used to make anything other than ornaments but silver-ware is turned out in considerable quantity. The common items are tea sets, bowls, dishes, tumblers, rattles, cutlery, candle-stands etc. While most consumers are quite happy with the die-cast silverware, those who care for ornamentation done by hand, and have the means to pay for it, can find craftsmen capable of meeting any order. Normally they are called upon to contribute to the bride’s dowry as the well-to-do would like to give the newly-weds as few pieces of silver, like a tashtari (dish) for serving betel leaves, with a dome-like cover piece, or a tray, or a gulabpash (rosewater sprinkler). And many still think an infant will have a better life if the grandmother could give it a silver spoon or a rattle to play with. 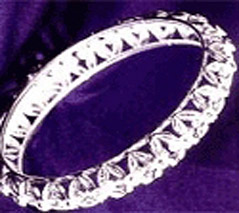