Often, with not even an hour’s travel, it is possible in Bangladesh to chance upon at least a few families of traditional potters still making the beautiful low temperature unglazed pottery that their forefathers have been making since time immemorial. The profusion of this craft is quite understandable when one considers the easy availability of soft alluvial soil in deltaic Bangladesh and the creativity of its artisans.

The potters of Bangladesh follow traditional methods and have over thousands of years been crafting pottery to meet the domestic, ritual and ceremonial needs of the community around them.

The terracotta temples built during 15th to 17th century show the skill and imagination of the potters at their best. During the 14th and 15th centuries, a number of mosques and mausoleums were built adopting local village architectural form of thatched house and using terracotta to decorate the outer surface.

Clay and terracotta products for domestic pottery and as festival toys and artefacts are available throughout Bangladesh all year round. The figurines, objects and items of play have a long and ancient history emanating from the divinities, votive offerings and ceremonial pottery of thousands of years ago.

The potters in Bangladesh have maintained this clarity of design, by using decoration only in so far as it enhances the natural beauty of form. Using the simple wheel and deft fingers, the potter moulds a profusion of domestic pottery which is remarkably functional. For water storage, the shape is one that keeps the contents cool; for cooking, the form preferred is that which conserves fuel. Larger vessels with elongated shapes or heavy jars with wide rimmed openings are used for storage. There are special pottery containers for different items that are as diverse as they are attractive.

Clay items are made in Bangladesh in two traditional ways: on the wheel, and by the hand. In general all toys, dolls, figures (human and animal) are made by hand modelling or in a mould. Pots and pans, jars, bowls, pitchers and storage vessels etc. are made on the wheel, or by a combination of both techniques. The wheel work is traditionally the occupation of men whereas hand modelling, shaping finishing etc. is done by the women.

Glazing, a relatively new technique has added a new dimension to the ceramic craft of Bangladesh. Glazing, ash trays and other products are crafted from Rayer Bazar clay.

TECHNIQUE AND PROCESS
In Bangladesh the potters usually collect black clay from the paddy fields and ponds about seven to eight metres below the surface while sandy clay is collected from the riverbanks or paddy fields at the depth of one or one and half metres from the surface. For digging, an iron spade is normally used. After digging the clay is carried to the potters village or work place by boats, bullock cart or physically on the head or shoulders in baskets. The clay is stored in the shed or courtyard as many potters maintain a special place in the courtyard to preserve the clay.

Clay is preserved normally for a couple or months or sometimes as long as a year, so that it becomes suitable for shaping. It is proved that the longer the clay is kept exposed to the elements the better its quality and the more useful it is for pottery making.

The basic equipment used is the potter’s wheel – a strong wood circle connected with short wooden spokes, when turned on a pivot of hard wood or iron, is the basic tool of the village potter. The carefully prepared clay is thrown, and spun on the wheel, by the craftsman to skilfully shape the item required. At the outset the required amount of clay is cut of from the stored clay. It is processed in the open with a thorough beating with an iron spade and then kneaded with the hands or feet. The clay thus becomes soft and free from impurities like stones, pebbles, wood pieces etc – this process is repeated about seven to eight times. Small round clay pieces are then formed called buti which are used as a base for giving shape or form to any vessel. Or they are set onto a mould, para, and beaten with a wooden hammer or dola which gives it a flat round shape. In the mould the clay is beaten with a hammer with one hand and turned over by the other hand, till it acquires the shape of a bowl which is then left in the sun for 10 to 15 minutes.

After this with the help of a flat shell, the rim of the bowl is shaped and smoothened with a wet cloth pad, and again kept in the sun for 10 to 15 minutes and covered with a thin cloth or gunny sack, so that it does not harden and crack.

In the next stage, in order to give the final shape of the vessel, another mould is used, which is called atael. This is a wooden mould, the top of which is very smooth. Before it is used some ash powder is rubbed over so that the clay object can be removed easily. 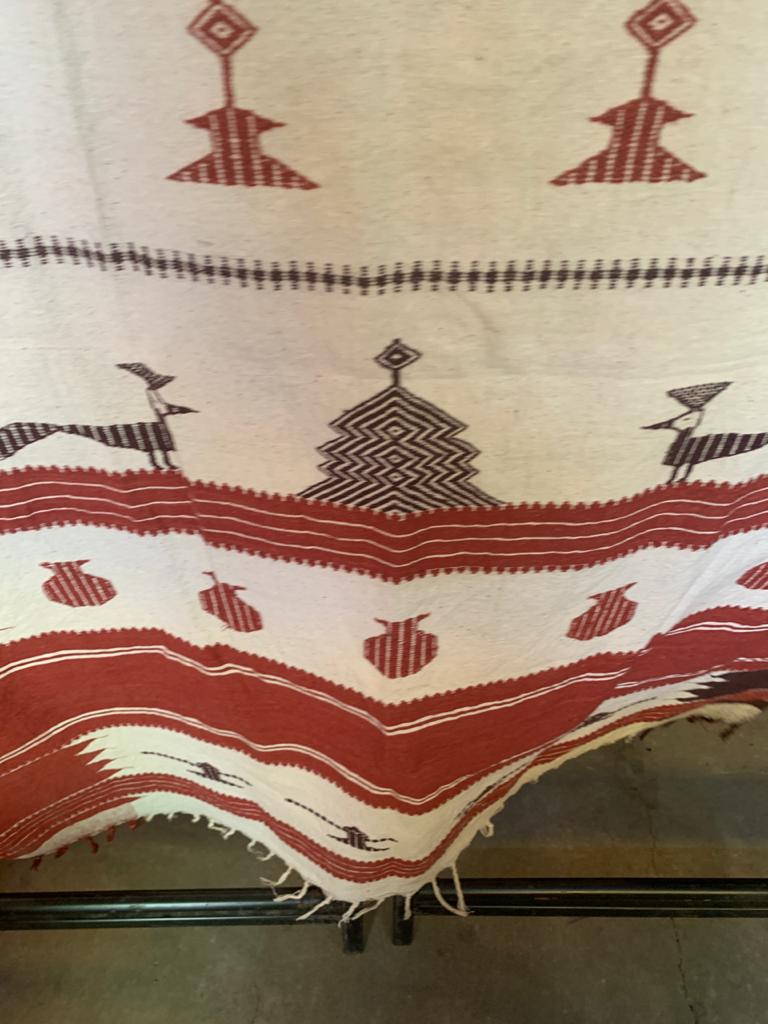 Cotton and Silk Weaving of Odisha