Bamboo and cane, or rattan, are considered as non-timber forest products. Products made from bamboo and rattan are popular the world over; these products have enormous earning potential and bamboo products, along with rattan-ware and reed-ware are a source of income for poor artisans who have been engaged in this craft for centuries.

The stems of the giant varieties of bamboo are used for making decorative craft items. The bata or reed, a smaller variety that grows in the southern and western regions, is used for making a variety of baskets. Bamboo and bata are plant varieties whereas rattan is a creeper.

Craft areas are located close to the source of the raw materials. Bamboo craft is found mainly in the south-western and central parts of the country, whereas rattan-ware is distributed all over the island-country. It is mostly women who practise these crafts, though entire families are sometimes engaged in this craft as a means of procuring a livelihood. Most of the products are made for the local market.

RAW MATERIALS
Bamboo has not been cultivated systematically in Sri Lanka. Though 14 species have been listed for the country, only five are widely used: B. orientalis, B. vulgaris, B. vulgaris, var. vitata, D. gigantius, and O. stridula. Although there are more than 17 varieties of bamboo, yet only a few species are used in the making of craft products. The common varieties are yellow, green, and giant varieties of bamboo. The stem of all these species is useful for conversion into craft items. There is a smaller variety of a reed called bata that grows in the southern and western regions of the country – this is a common raw material for the basket-ware industry. Bamboo and bata are the plant types while rattan or cane is a creeper that grows wild: there are about 10 species, three of a large diameter and seven of a smaller diameter. The canes are split and used for making the body of the baskets while the canes with a larger diameter are used to make the frames and handles. The artisans buy bamboo (Bamboosa Vulgaris) and bata (Ochlanda Stridula) from local suppliers; these reeds grow in abundance along the banks of rivers and streams in nearly every part of the island.

The varieties of cane or rattan are as follows;

Cane artisans sometimes face a shortage problem on account of government controls. Cane is found in abundance in the crown forests of Polonnaruwa, Moneragala, Ratnapura, and Matara districts. Cane artisans are located mainly in the western part of the country; the transport costs incurred by the artisans is forbidding and hence craftspersons buy from local suppliers or they buy split canes from dealers at Colombo.

METHODS, PROCESSES, & EQUIPMENT
Traditional methods continue to be used for processing the raw materials and for creating products. Some basic weaving techniques are traditionally used by the weavers. Depending upon the utility of the product, open-weaves or closed-weaves are used.

The above weaving techniques are used for either rattan or bamboo baskets depending upon the kind of basket being woven, the way it will be carried by the person, and its end-use.

2. EQUIPMENT
The equipment and tools needed for bamboo craft include a barrel or a large vessel for boiling or steaming the bamboo and sharp, strong knives to slit the bamboo into strips.

3. PROCESS(ES)
The bases of the baskets are made strong and firm with the shapes being oval, oblong, or square. In the pre-crafting process, the material is seasoned and protected from insect attacks. The bamboo is split vertically or cut into horizontal pieces, which are boiled or steamed with a chemical solution; they are then treated with a wood preservative after which they are sun-dried and smoked. This is then further shaped and coated with paint and then cut into shapes and sizes required for decorative-work.

The bata reed is slit into long strips and then cleaned thoroughly; various articles of domestic use are woven with this. The most popular technique for basket-weaving is ’twilling’ which is used to weave most articles. Large storage containers are made of bata to store paddy. Tea plucking baskets are crudely made out of this. Bata craftsmen use sharp knives to slit and clean the strips.

Rattans are cut into 12-feet lengths and then cleaned and sun-dried. The bark of the cane is carefully peeled off with a knife. This is then slit into six to eight strips and the pith is peeled off. The inner portions are slit and used for making rough articles. When cane is used for basket-weaving, it is first soaked in hot water for softening. The tools required are sharp knives to slit the cane and peel off the pith; a cane-slitting device is made by fixing a sharp blade vertically on a log of wood and drawing the cane against the cutting edge.

The weaving usually starts from the bottom of the baskets; two pairs of rigid canes of the required lengths are interlaced at the centre at right angles to two similar pairs of canes of the same dimensions. Through these are interlaced the weaves or the weft elements which start at the point of intersection. In the first round all the warp elements are held tightly together by the weaver. This may be repeated in the second round also. In the third round, the warp elements are separated and in the fifth round they are separated into single stakes.

If it is found necessary, additional stakes called bye-stakes are introduced to get a closer weave. Once the bottom of the basket is completed then the stakes are bent upwards and the weaving is continued till the desired height is reached. The ends of the stakes are folded down and pushed into the weave to form a tight edge. The common weave found in cane work is the plain weave; depending on the type of basket, other weaves like satin or twilled are also used. Wickerwork is found in linen and wastepaper baskets.

4. WEAVES
Generally, in weaving bamboo, bata, or rattan the warp and the weft are of different gauges. The warp element is rigid and forms the framework around which the weft is woven; the latter is therefore more pliable. The rigid element is a whole cane while the weaving element is a strip.

There are certain basic weaves that are commonly used. The weaving patterns depend upon the strength of the final product. Open weaves and closed weaves are adopted for baskets to ensure that nothing drops out.

Very detailed and intricate weaving patterns are used by the artisans to make cane baskets, trays, and furniture. Bamboo shafts are wider and sometimes the width is retained for making items like cups, containers, etc. Items like handbags and baskets require wide strips and so the weaving is also a little different.

THE PRODUCT RANGE
1. UTILITARIAN ITEMS
Utilitarian items made from bamboo and rattan include boxes for storing paddy, linen baskets, winnowing fans, food covers, strainers, betel-leaf baskets, tea-plucking baskets, and fruit and vegetable baskets. Different types and sizes of cane or cut cane are used, depending on the product to be made. Rattan is mainly used for the heavy baskets, trays, and wicker-work traditionally made by the womenfolk in the rural areas. The methods by which the baskets are carried determines their type and form. Some are carried by balancing on top of the head, some are a pair of items that are suspended on either side on a bamboo stem and there are some other baskets that are carried over the back with a bamboo or fibre strap; an example of this is a tea-plucker’s basket made of coarse bamboo splits. The designing element in these products is fairly standardised as these are items that are used on a daily basis.

2. ORNAMENTAL WARE
Ornamental ware in bamboo and rattan are being widely made by artisans all over the country; the main motivation for this is that craftspersons are searching for new ideas to produce wares that will fetch them better prices. Bamboo becomes a highly ornamental material when it is processed, painted, and finally lacquered. The wide range of ornamental items in bamboo and rattan includes wall plaques, lamp-shades, lamp-stands, vases, letter racks, letter openers, calendars, table mats, trays, spice jars, jewellery boxes, and fancy toys.

3. FURNITURE
The affluent classes are able to afford fashionable furniture made out of rattan and bamboo, seen as high-quality products. Making rattan furniture is a highly labour-intensive activity and entails extremely skilled craftsmanship. This craft has a very recent origin in Sri Lanka and the styles are influenced by those prevailing in the Asian countries where bamboo and rattan are found in great abundance.

PRACTITIONERS & LOCATION
This craft is mainly confined to certain social-groups and is predominantly practised by women. Cane artisans are found in the southern and western parts of the country.

PROBLEMS, ISSUES & INTERVENTIONS
1. MIDDLEMEN
Middlemen flourish in this craft mainly due to problems like raw material shortages, transport problems, lack of capital, and limited access to credit and marketing. There is a paucity of information on market forecasts and capacity. There are middlemen who buy the craft items from the artisans on a commission basis and this creates payment problems for the artisans. The challenges in this sector today are proper planning of production, organisation of marketing channels, and competitive pricing.

2. DEPLETION OF RAW MATERIALS
The constant depletion of raw material resources poses a threat to the artisans’ source of income. Government intervention is necessary to ensure that there are enough bamboo and rattan plantations to supply adequate quantities of raw material at reasonable rates. Some areas in Sri Lanka have a ban on the cutting of cane and some jungle areas where the plants and creepers grow are inaccessible. Illegal cutting of cane plantations is causing long-term problems for resource-availability.

In recent times the Forest Department has taken note of this problem and has started implementing regular programmes for the propagation of bamboo and rattan. Seedlings are being distributed for planting in various reserved areas under the aegis of the National Crafts Council and similar government bodies. However, the artisans are not involved in these projects.

3. INTERVENTIONS
The Radawadunna Rattan and Bamboo Training Centre has been established by the Ministry of Rural Industrial Development and has helped in the evolution of these crafts with expert guidance from foreign advisers and consultants. Experts from Philippines have helped in guiding the artisans with newer techniques in the making of rattan furniture. New tools and equipment have also been made available to the artisans. Rattan of a larger diameter has been used in making chairs, settees and other items of furniture. Craftsmen have learnt the technique of heating and bending rattan poles to obtain the required form, a task that involves a great deal of practice and application. Large size rattan is used for the framework and the splits and cores are used for wrapping round and binding. A certain amount of mechanisation is needed for processing of raw materials and in some other stages of production.

4. SUGGESTIONS
A very large proportion of the artisan population in Sri Lanka is involved in these crafts; the shortage of raw material poses a huge threat to these crafts. About 75 per cent are engaged in rattan crafts and about per cent are in bamboo crafts.

Improving the tools and technology of the artisans, training them in product improvement and innovative designs, providing better credit facilities, organising better marketing facilities, as well as providing satisfactory infrastructure will seriously boost these crafts. 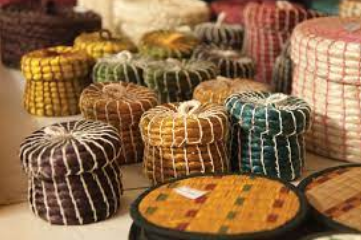 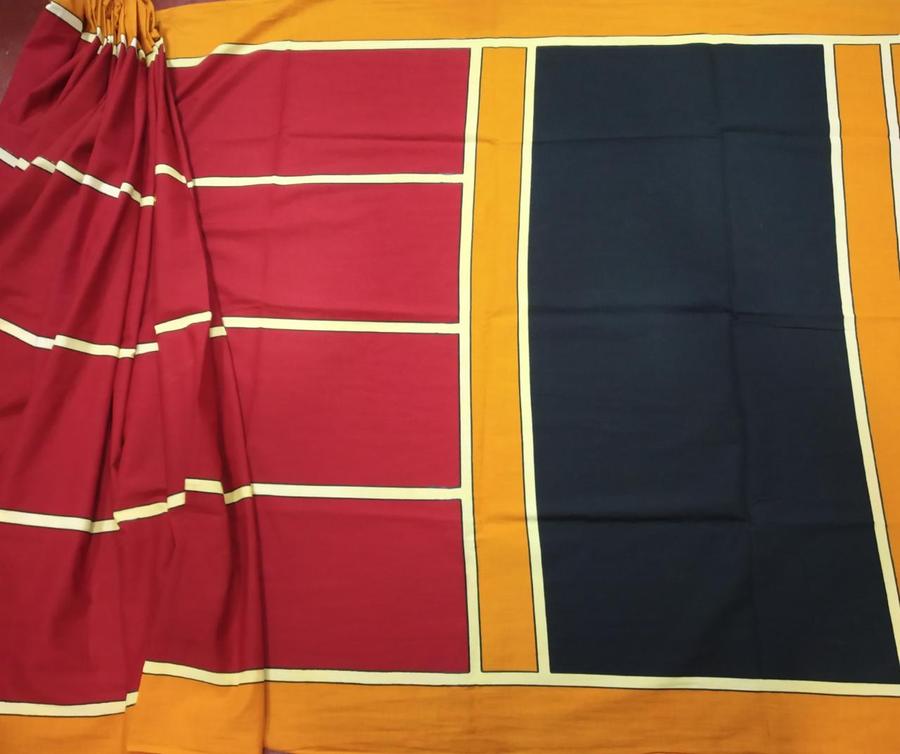 Handpainted Kalamkari on Cloth of Sickinaikkenp...