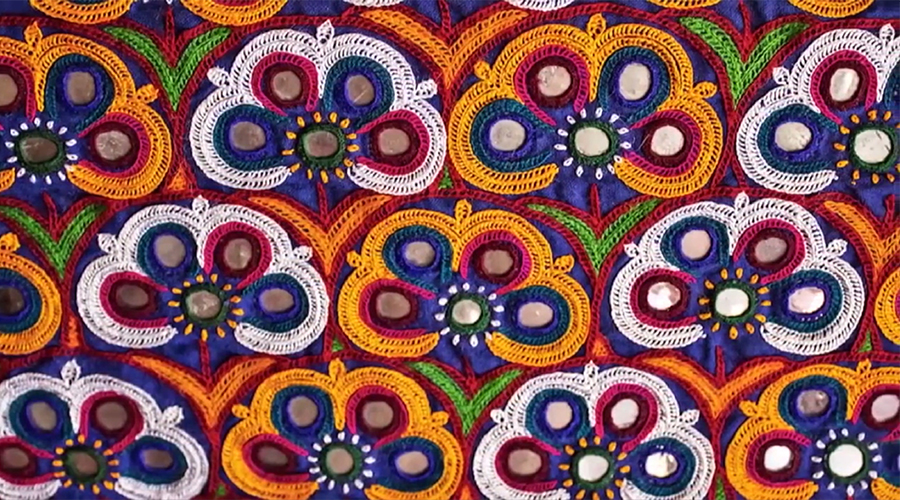 Introduction:
Gujarat can be divided into three main regions; mainland of Gujarat, Kathiawad region of Saurashtra, and desert regions of Kachchh. The Kachchh area is mostly populated by the nomadic and pastoral communities. Kachchh forms a meta-cluster in which nineteen identified clusters are located. Kachchh is eco-diversified region with mangroves, grassland, marshlands, Little Rann and Gulf of Kachchh. This region of Gujarat is inhabited by many communities who once migrated from places like Sindh, Baluchistan and even Afghanistan almost five centuries ago. The Ahir community of Kachchh region has a distinctive craft style that is deeply rooted in the community life style. The utilitarian products of community are adorned by women in embroidery. The stitched products mark the tangible aspects of dowries. Thus the embroidery forms an important activity practised to make dowry gifts by the community and also as sign of group identity, marital status, etc.

Community:
Ahir is one of the many tribes of Kachchh region who under the patronage by royal family found their own distinctive style of embroidery. Like Rabari, Bhanushali, Meghwal and others they are pastoral communities or nomadic sheep herders who settled in Kachchh. Ahir, the name finds its origin from Sanskrit word Abhira, which means fearless. They identify themselves as Gopas or herdsmen who came with Krishna to Dwarka and followed the Gop culture.

Stitches:
It is style distinguished by its tiny mirrors, surrounded by minutely detailed medallions worked with geometric motifs. Using bright yellow, orange, black and red, the pattern is placed in grid arrangement. Sankli or chain stitch for outlining and vana or herringbone stitch used for filling along with bakhiya and dana serving the purpose of filling and detailing the motifs and designs. This gamut of stitches comprises the Ahir embroidery. The inter weaning space is covered with the chain stitch and the buttonhole stitch, which is a straight thread crossed at right angles many times over.

Products:
The embroidery forms an integral part of the culture where the Ahir women adorn torans, chaklas, quilts, cushions and belts etc. The roundness of the motifs by using repetitive circular mirrors is distinct to Ahir tribe.

Ahir is a historical pastoral tribe of India spreading across Kutch and Saurashtra in Gujarat. Ahir women wear embroidered skirt ad the kapaa or kanjari with a hed veil. The kanjari is full covered in mirror work and the making is known to be very time consuming and tedious. Ahir embroidery is identified as superior in design and aesthetic. It has a good balance of motifs and embroidery. The embroidery is outlined with the open chain stitch executed in yellow or white yarn.