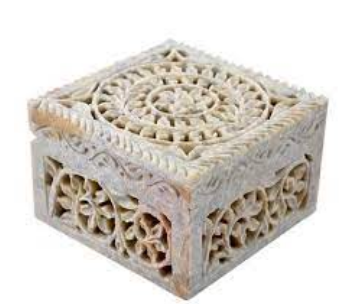 Statuettes, Idols, and jaalis are carved out from various stones by craftsmen at Agra and Vrindavan. Alabaster is a type of stone used in Agra. It has some resemblance to marble. It is boiled overnight and then wax is applied to take on the design. It is an extremely soft stone that requires finger pressure to chisel. At times ornamentation of idols is done with paint and gold leaf overlay. Taj Mahal is one of the purest and existing examples of beautiful carvings done by artists of Agra. Brilliant miniature models of the Taj Mahal are carved in the same texture and work. Articles such as containers etc. are also made with this stone.

As Vrindavan is a place closely associated with Lord Krishna, numerous images of him are carved  out of the stone. The use of semi-precious stones or cheaper synthetic gems is done for embossing on the articles.  Sange-rathek is a dark brown stone with yellow spots which is found in Jhansi and its surrounding areas from which articles such as lamp-shades, incense-stick stands and small medicine- grinders are crafted.

At Mathura animal figures such as elephants, owls, tortoise and egg-shaped objects are carved with  floral jaali on them. Drilling of holes is mainly done with a power driller and a chisel is used to hollow out the inside of the object. No joints are created in small sized figurnes animals, is carved out through the jaali and at the end the piece is given a buffed finish.

Varanasi is known for its remarkable carvings, statues of Buddha, figurines and animals in gorara, reddish stone, khorai and pallar. Sarnath, VishwanathGali and Dasashwameth Ghat are its main centres. Idols in relief are carved out on sandstone in Varanasi and Chitrakoot. These are placed under trees for worship. The stone is brought from the quarries located in the Chunar Hills.

All craftsmen were former carvers of ivory who switched to wood and stone due to the ban on the use of ivory about two decades ago in India.Tools such as drills and pen drills, electric lathes, batali/files, bahali, for engraving, zameensafni to make holes, and chisels etc. are used for the crafting Process. 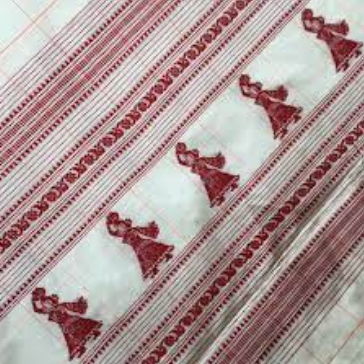 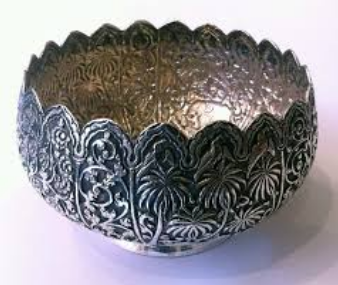