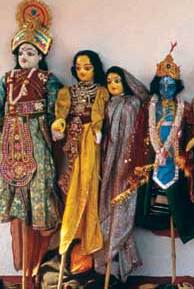 West Bengal has a rich tradition of rod puppetry, which is locally famous as putul nach (dancing dolls). The Bengali puppeteers believe that rods are stronger as compared to strings and lend greater support and freedom in giving the required animation as well as manipulation. Only a handful of people practice this art form in the rural areas of West Bengal now.
The puppets are one and a half meter tall and are built over bamboo which may be two and a half meters long. The puppet has a basic bamboo structure over which a paste of hay and rice husk is plastered to give the required shape. The absence of legs is camouflaged with saris or dhotis draped over the puppets befitting the requirement of the character.
Strings are attached to the elbows which allow for easy manipulation and displaying highly dramatic movements. The rod holding the puppet is placed in a bamboo socket which is firmly tied to the puppeteer’s waist in front.
The puppeteer’s each holding a puppet; perform from behind a bamboo-curtain. While manipulating the puppets the movements of the puppeteer’s appear to resemble dancing. The themes are inspired by Ramayana, Satee Behula.

Dhurrie, Floor Covering and Carpet Weaving of A...