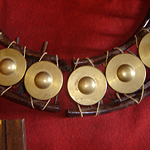 “In south-East Asia, their sheer profusion and their endless variations render generalization perilous, while at the same time making a truly comprehensive account virtually impossible. The fact is an instrument which goes under a certain name in one place may be know by others only a few miles away, while elsewhere the same name may be applied to a different instrument altogether.

It cannot, of course, be denied that ancient ties with the two immense and older civilizations were fundamental to the shaping and evolution of the region. Ancient beliefs were not destroyed by the great religious movements – Hindu, Buddhist, Muslim, and Christian – which were to spread throughout the region, but rather were adapted and absorbed. They were at the root of many dramatic dance forms, ceremonies of ploughing and harvesting, rites of passage, court rituals, and other social conventions which have all, in varying degrees, survived to the present day.” , writes Eric Taylor in his book, Laos – Musical Instruments of South – East Asia.

Archeological finds, temple bas-relief and painted murals all attest to a tradition of music in the everyday life of the people from very early times. They also show a similarity between contemporary musical instruments and those of great antiquity. Many instruments are comparable in nature to those from India, China, and the Middle East which suggests an interaction of cultures that went beyond commerce, trade and religion.

In Laos music is close to people’s hearts and is used for love and courtship, as accompaniment to popular folk dances and musical theatre based on the maw lam (repartee) tradition, at festivals, at celebrations, at royal ceremonies – in every aspect of life.

While some instruments are played alone, though seldom exclusively so, most are viable only in an ensemble and accompany dance or other performances. The principal instrument in folk and pop is the khene. Laos’ classical music forms use a standard ensemble which consists of a set of tuned gongs, a xylophone like instrument, the bamboo flute and a double-reed wind instrument similar to the oboe. What is also popular is the Pha Lak Pha Lam, a dance-drama based on the Hindu Ramayana epic. Instruments like the Button-gongs (rbaang), Cymbals (cheeng), Bronze kettle-gongs (yaan), Shaman’s horns (tbu‘) are played during rituals and ceremonies, while the Friction Earth Drum (groong wwt) is used to summon rain to water the crops.

Musical instruments represent a rich diversity of types, styles, shapes and construction. Broadly they can be categorised as wind, percussion and string instruments – the means by which an instrument produces sound. Various techniques are used to produce the sound: blowing through holes directly or from a little distance, beating, striking, tapping, bowing, rubbing and pulling, plucking, patting, jabbing, poking and stamping. Wind instruments are found amongst almost all ethnic groups and include vertical and transverse bamboo flutes, single and double reed wooden trumpets or pipes, buffalo horns and the Khene, the national instrument of Laos. Stringed instruments range from plucked gourd lutes to bowed bamboo fiddles. The Percussion instruments come in various shapes and sizes – bronze drums (Mon Khmer, Lolo Burmish groups), gongs, wooden bells, bamboo clappers, chimes and cymbals.

Regional variations of each instrument are many and their uses depend on the occasion and purpose. The same instrument or its variation may go by a different name, in another region or within another ethnic group. To generalize would be to ignore differences. However, this documentation will focus on the general rather than each variation.

The Alak, an ethnic group in southern Laos of Mon-Khmer origin, make stringed, percussion and wind instruments as the koreding, the people, the longleui, the chuchu and the tunglung. It was once customary to make a
tunglung every year, but now, the Alak reuse the previous year’s instrument.

The Kmhmu‘ musical instruments are made of wood, bamboo or metal depending on their purpose. Sometimes even a simple fresh leaf could be used to produce sound and music. The Kmhmu’ reserve certain instruments for men and others for women, or use some instruments for a special purpose only.

CATEGORIES OF INSTRUMENTS BY MATERIALS

METAL / BRONZE The majority of metal instruments in current use fall into one of the following categories:

The crafting of metal instruments requires training, special knowledge and skill of metal handling. Traditional societies regard metal craft, not merely as a manufacturing process but one requiring spiritual preparation and observance of proper rituals, and usually undertaken by men.

Bronze drums carry great ritual significance in Laos and are an integral part of many ceremonies amongst Mon-Khmer and Lolo-Burmish groups. They are believed to have immense prestige and also carry magical powers, which are invoked during agricultural activities and social ceremonies such as funeral rites and summoning of ancestral spirits.

Bronze is an alloy with ten parts of copper to three of tin. The exact ratio and alloys used for the manufacture of bronze drums is a closely guarded secret. Sometimes, iron, brass and other alloys are also used. The traditional techniques of casting bronze drums continue to be used to this day, with only minor variations in design. However, bronze drums are increasing being substituted with the present-day drums, made of wood.

Suspended gongs are used throughout the region. Gongs are regarded as living personalities, as the habitat of spirits and are used on solemn occasions. There are many taboos that surround them, which if ignored, the hill people believe, can lead to disaster. Gongs are honoured and propitiated with flowers, candles, incense, and other offerings.

There are two types of cymbals used – rim shaped and cup shaped. In Laos, the smaller narrower rim of approximately 12-14 centimeters diameter is used.

A series of oblong plates and slabs of metal are supported in a wooden frame and arranged scale-wise. They are struck with a beater to produce sound.

Gongs and other metal instruments are forged, unlike bronze drums. Molten metal is shaped by a long process of alternate hammering and re-heating. Periodic adjustments are necessary even after several years until the gongs settle down. 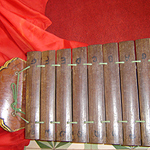 Flutes and reed pipes vary in styles and materials from region to region and in the way the sound is generated. The majority of flutes in Laos are end-blown i.e. played with the instrument projecting forwards, rather than transverse flutes. The flutes that men play are quite often different to those played by women.

Flutes are a thinly walled bamboo tube with holes. Some flute models have three holes in them, one of them in the middle to blow in, and the other two at each end. Variations of this are models with three finger holes in the middle section with an additional hole at the back of the instrument and so on.

Examples of variations are:
The suling, a type of flute, is a bamboo tube, closed with a node at the top, and open at the bottom. A nick is cut into the node, leading to a small hole in the wall of the instrument. The incision is partly covered by a narrow ring of bamboo or rattan. Suling can have four, five, or six finger-holes, but there is a good deal of variation in size and sound. Suling is quite often used in a generic sense to refer to flutes.

The khlui, too, is made of bamboo but it has a separate mouthpiece. The khlui is made in three sizes, each with seven finger-holes, (except the smallest, which has six) and a thumb-hole at the back.

Pi is another generic term, and several different types exist. Unless otherwise qualified, pi can be taken to mean the commonest form, the pi nai which consists of a wooden tube, normally made of hardwood about 4? cm long. There are six finger-holes. The reed itself is taken inside the player’s mouth, and the other end of the metal tube is inserted through a disc which closes the near end of the body of the instrument.

The pi of Phongsali and the pi of Xieng Khouang are examples of variations of reed pipes. They are composed of four separate parts: a mouthpiece with a reed, and three pieces that give it length and width with the main part containing the sound holes. If necessary the main part can be prolonged by a tailpiece. The most sophisticated version of this is the khene

The Khene, a reed musical instrument, is traditionally used for love and courtship. According to tradition the
khene was, originally, assembled to reproduce the song and call of a special species of sparrow. Today it is found everywhere and used not just by the Lao ethnic majority but also by Tai speaking groups. The Hmong have their own distinctive version of this instrument. It is played solo as in traditional Lao music or in combination with other musical instruments. It can also be played in a full “Khene Orchestra”. Usually, however, it is more popular in rural areas and is commonly used to accompany folk singers or drama actors.

The Khene is made from a special kind of bamboo, similar to reed, of approximately a 5 cm diameter and 250 cm length. The length and size depends on the desired levels of sounds. The bamboo is harvested when it is about 12 months old and left to dry for a few weeks. The hole has a silver (or a silver and copper mixed) little tongue with a triangular cut in the middle, which determines the sound of the instrument.
Khenes are made from six up to nine pairs of bamboo tubes.

Kldoong
The Kldoong is made of bamboo tubes of varying lengths. When the tubes are struck, various sounds are produced from low to high pitches and of different timbres from loud to soft and clear to dull clapping sounds.

Originally the kldoong was simply a wind-chime, made of bamboo tubes of different lengths, which served to scare away the animals and birds from the rice fields. It would swing with the wind the bamboo tubes they would strike against each other, in the fields, producing , producing sounds which frightened the Later the kldoong evolved into a musical instrument that is used in combination with other instruments, such as drums (bring), gongs (rbaang), cymbals (cheeng) and bamboo humming-forks or buzzing-forks (daav daav), and the rhythmic and expressive percussion instruments to accompany a performance to the famous, traditional Kmhmu’ sword-dance, or to accompany modern dances.

These are instruments made from or modeled after animal horns and comparable to the Western trumpets. Conch-shells, usually used in temple rituals and ceremonies, both Hindu and Buddhist, are used to produce sound by making a hole in the side or at the apex of a conch, and are the oldest examples. Shells are still used on ceremonial occasions and even though they might not have a musical function.

Trumpet-type instruments are also made from bamboo. An unusual example of an instrument usually played in groups, is the kata batang, which consists of two parallel tubes, one longer and thicker than the other, connected by two short tubs at right angles, with the upper one projecting through the large tube to form a mouthpiece.

String instruments are much less dominant in South-East Asia. The khim is one such an instrument, with fourteen notes, each produced by three strings tuned in unison. It is an adaptation of the Persian santur.
Lute is generic term, embracing all instruments both plucked and bowed. 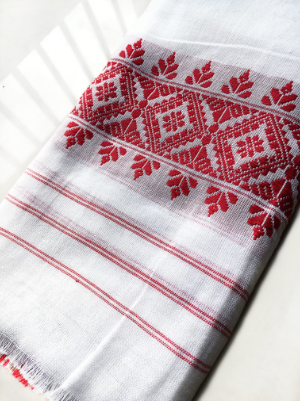