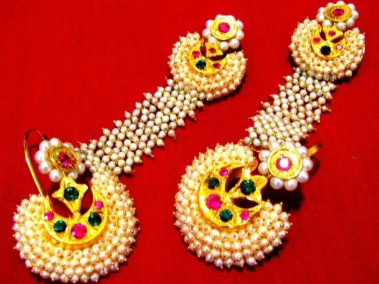 Jewellery and Jewelled Objects of Goa

Goan jewellery was brought to the world by “Daivadnya Brahmins,” who were renowned for their jewelry-designing abilities. They were, in particular, the first to bring Goan traditional jewellery designs to Europe. Since then, the popularity and demand for Goan jewellery has only grown.

In Goa, the number ” is believed to be auspicious. Brides, on their engagement or wedding day, receive an ornament made up of seven bangles connected by a clip and a ring made up of seven thin bands. Both of these ornaments are produced by local artisans.

Goan traditional jewellery has a large variety of jewellery for nearly any part of the body.

Bajubandh, as the name implies, is an armlet worn by women on their upper bodies. A traditional gold bajubandh is made up of floral and peacock motifs that are meticulously designed by local artisans.

A typical Goth bangle made of gold has a minimalist look and is decorated with floral motifs handcrafted by Artisans.

Tode are chunky gold bangles worn by Goan women at a festive event, pooja, or wedding. These bangles are flexible with a pin. The screw makes wearing and removing the bangle a breeze.

Pichodi is also a kind of bangle worn by women in Goa. A typical Pichodi style is made up of pearl or gold motifs set in the shape of a crown. The more expensive designs can have gemstones instead of Gold motifs and pearls.

The beaded gold bangles are known as Piddukachi Kakna. The standard style incorporates gold motifs with a variety of coloured beads such as orange, yellow, red, and so on. While the beads used in these bangles come in a variety of colours, the most well-known patterns are embellished with black beads. Piddukachi bangles are quite thin and can be worn for hours without being uncomfortable.

Coin Bangles are gold kadas that are embellished with patterned motifs, coloured or gold bead motifs, and coins. The coins bear sacred images of Goan forest deities such as Kelbai, Bramhini Mai, Vetal, and Mahishasurmardini. Since these bangles are lightweight, women wear them on a regular basis.

Jewellry for the neck,

A mangalsutra is an important piece of wedding jewellery for any Goan bride. The mangalsutra worn by Goan brides is known as “Kasithaali.”  A traditional Kasithaali is made up of a gold chain adorned with coral and/or gold beads, as well as a pendant.  A religious deity, such as Goddess Lakshmi, adorns the pendant.

Galsiri is a necklace made of coins. A typical Galsiri is made up of coral and gold beads strung together in a gold chain (with a string fastener) and gold coins. A galsiri necklace, decorated with typical religious symbols and figures of Goan forest deities such as Kelbai, Bramhini Mai, Vetal, and Mahishasurmardini, is an essential part of Goan Hindu bridal jewellery.

Jewellry for the ears,

Pake are traditional ear cuffs worn by women on special occasions such as poojas, family gatherings, or weddings. They are traditionally adorned with Konkani designs and patterns. A typical pair of Pake is made of gold and features floral motifs as well as pearls strung together to create a mesh-like pattern. Diamonds or precious gemstones are used in more expensive styles.

Kaan are another kind of earcuff worn by women at a traditional Konkani wedding. Kaan earrings are made of gold and are embellished with gold motifs such as leaves.

Ved are simple stud earrings made of gold and set with diamonds or precious gemstones.

Jewellry for the nose,

A Nathini (a nose ornament) is worn by Goan women at weddings, religious rituals, and family gatherings. It differs from other nose pins worn in various Indian regions. A typical Gold Nathini is made up of pearls with a pink or white stone in the middle (sometimes a precious gemstone such as Rubie or Emerald in the middle).

Jewellry for the feet,

Payal is the traditional anklet worn by women in Goa. A typical Goan anklet is made of gold or silver and has a plain pattern.

The common toe ring worn by women in Goa on a regular basis is called a Vedi. Vedi are usually worn in pairs. A pair of typical Vedi is made of either gold or silver. 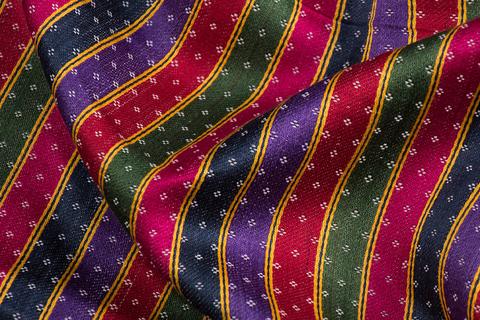 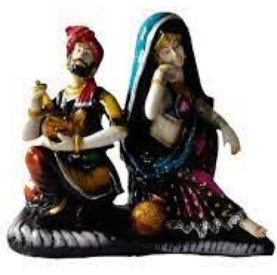