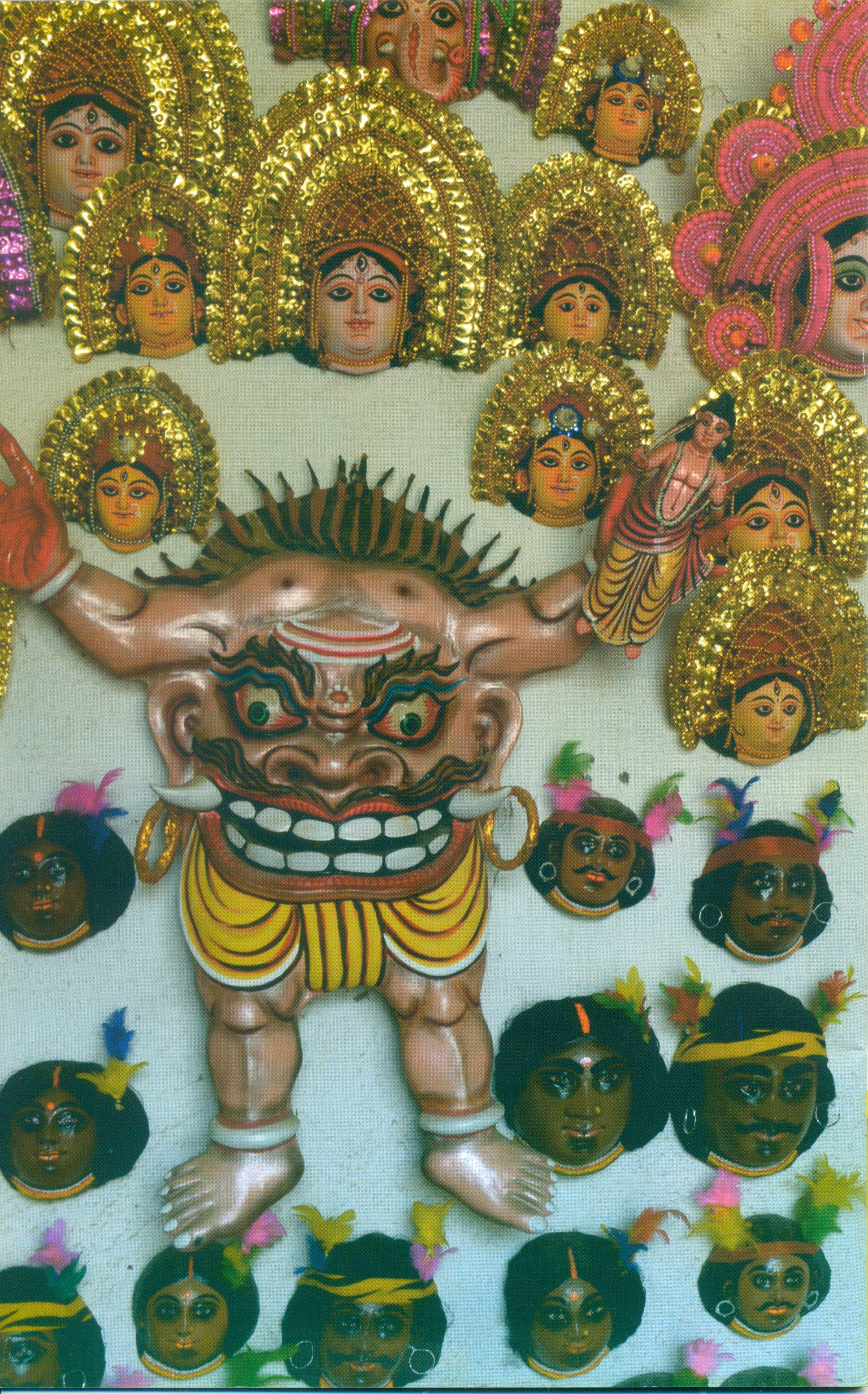 The includes Chapters on masks in the Sanskrit treatise on the dramatic arts – Natya Shastra (200 BCE – 200 CE) were considered an intrinsic part of the performing arts. Masks continue to play a significant role in ritual, carnival, theatre and dance in the classical, folk and tribal traditions. From personifications of goddess Durga and the Gambhira dance in West Bengal; the Krishnattam and Mudiyettu of Kerala; Sahi Yatra from Odisha,; Chham and Yak dances from Sikkim and Ladakh; Ankiya Bhaona in Assam; the Ramman in Garhwal, Aji Lhamu of Arunachal Pradesh; the Yakshagana and Boota rituals of Karnataka and the rare Islamic tradition of   Pulikkettikali – tiger performances at Muharram in Kerala, are just some representative uses of performance masks. Performed annually across three eastern states the ritual dance-drama  Chhau  enacted on the occasion of the spring festival in the month of April is one such tradition. Called Purulia Chhau in West Bengal, Mayurbhanj Chhau in Odisha and Seraikela Chhau in Jhrakhand feature the epics, regional legends and heroic battles between gods and demons, and morality tales using martial art and acrobatic moves.

The main centre of Chhau mask production, with over a hundred households involved is in the village of Charida in West Bengal. The masks are crafted in two distinct parts – the face and the headdress. Made by layering paper, cloth and clay the faces are modeled in a mould and finished with a small wood spatula – the thapi. The faces whether of gods or goddesses, demons, heroes, birds or animals are characterized by bold brightly painted outsized features. The headdress also outsized is customized with feathers, beads, pearls, gold and silver tinsel, borders, flowers and all manner of accoutrements to form a frame around the mask.

Chhau dance, its mask, costume, music and instruments was inscribed in the UNESCO Representative list of intangible cultural heritage of humanity in 2010.

The art of Chau mask making is around 150 years old. This began during the reign of King Madan Mohan Singh Deo of Baghmundi in Charida district of Purulia, West Bengal. These masks were used in Chau dance, which is a martial art and involves vigorous movements.

Charida village home to chau mask makers is in Purulia district which is a part of Chota Nagpur Plateau.

Paper pulp and clay are used for making these masks.  The materials of making masks are collected locally. Adornments are done with feathers and beads. Tools like Thapi, a small wooden tool is used fro finishing and brushes are used for colouring the masks. The masks are elaborate and and ornamental. They usually depict mythological figures like goddess Durga, Ganesh and demons. They also depict lions, tigers, deers, monkey, peacock etc.

Today these masks are made in small size to be used as home souvenirs and decorative objects.

Phulkari and Bagh Embroidery of Punjab