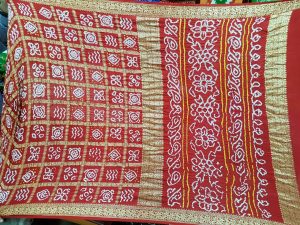 Mural paintings on the rock cut cave monasteries at Ajanta (2nd – 5th CE) depicting  figures clothed in speckled textiles provide evidence of a long tradition of patterning through tying and dyeing . Variously called bandhej in Gujarat, bandhini in Rajasthan and Madhya Pradesh and sungadi in Tamil Nadu, the terms are derived from the Sanskrit word for ‘tying up.’ While the techniques used are relatively similar each center is differentiated by its own practices of patterning and color usage that have been customized for their traditional clientele.

Bandhej is the art of the tie and dye in Gujarat. Traditionally, each village had its own typical colour schemes and designs, depending on the religious and social customs of the place. The centres where the craft was practised include Jamnagar, Anjar, and Bhuj. This craft now faces severe competition from the machine printing of bandhej designs.
Bandhej requires the cloth to be dipped into a colour-bath of choice, after which the cloth is folded to a quarter of its size. The area to be worked upon — a sari border, pallu, or the body of the sari — is separated, and then is tied with strings to form various designs. The designs are made from a combination of small dots and circles. The artisans makes the designs without the help of coloured strings or blocks. The tying of the border and the discharge of the colour is called sevo bandhavo. The borders are broad, and are worked both in complementary and contrasting colours.
The designs are composed with minute attention to detail. An inexhaustible number of colour schemes are used. The colouring technique involves the lightest shade being worked in first, after which this is tied and a darker colour is inserted. This is done till the darkest shade is reached. The last colour the cloth is dipped into is the colour used as the background. The colours used commonly include red, black, golden yellow, and maroon. The quality of the bandhej can be determined by the size of the dots: the smaller and closer to the size of a pinhead the dots are, the finer is the quality of the bandhej.

Traditional bandhani in Rajasthan and bandhej in Gujarat can be seen on turbans, head-mantles, full gathered skirts – ghagara and saris. The colors and patterns worn are identifiers of community, marital status, position and occupation. One such example is of the auspicious bright yellow head-mantles with wide red borders and red central dots that are only donned by those women of the Bishnoi community who have borne male heirs.

The dot like patterns are created by tying the textile into knots with thread or by knotting in a grain of rice. The tied areas resist the penetration of dyes in the protected spaces thus forming dots. The designs are created by laying the dots in shapes as varied as flowers and birds to geometrics, by varying knot sizes, creating overlays and adding on colors through multiple dying.

The continuing popularity of the tie and dyed textiles is seen by its presence on haute couture lines and its coverage in fashion magazines with designs adapting to contemporary markets. 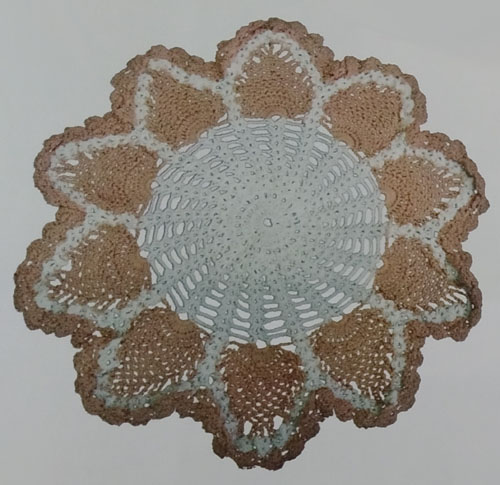 Crochet and Lace Work of Daman and Diu