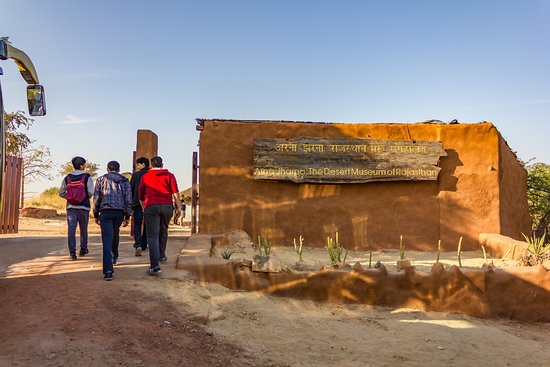 Envisioned by the late Komal Kothari, one of India’s leading folklorists and oral historians, the Arna-Jharna Museum can be described as a process of interactive learning experiences linked to traditional knowledge systems. It is a community museum and aims to celebrate the many ways in which ‘folk’ remains contemporary.

Arna-Jharna literally translates to forest-spring. Situated 23 kilometers outside Jodhpur in Rajasthan, the site of the museum was once an abandoned sandstone mine. Today, with water-harvesting, the crater of the mine has been transformed into a lake with a rich ecological and biologically diverse environment. The museum is committed beyond the preservation of objects enclosed in buildings. It can be regarded as a laboratory of the ordinary, a testing ground of all those basic structures of life that facilitate the art of survival in the desert.

Collection & Activities
For the first three years the museum plans to focus on a single object: the broom. The aim is not to display the variety of brooms found in Rajasthan but rather to examine and highlight the interrelationships of the broom to a wide variety of contexts – natural resources, local broom making techniques, the lives of broom-makers from marginalized caste groups, the myths, beliefs, and symbols surrounding the broom and the economy of the broom. The broom is a humble, almost insignificant object and yet once one begins to study it, it reveals the potential to understand botany, various craft techniques and modes of production and social systems and inequities.

Through its three-year concentration on the broom, the Arna-Jharna Museum hopes to clarify its interdisciplinary methodology, combining research on material culture; alternative curatorial models for grass-root cultural practices; and the cultural dimensions of development.