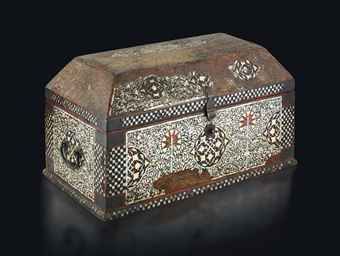 The craft of marquetry arrived from Iran to the land of Surat, Gujarat which is the hub of marquetry craft now. The patters fashioned by the craftsmen reveal the influence even today. It is locally recognised as ‘sadeli’. The craft is used to decorate architectural structures, ritual objects of religious significance and other utility goods. Now today those craft is utilised in making small decorative goods that are often sold in handicraft or global markets, such as photo frames, side tables etc.

The technique involves creating a patchwork of thin slices of wood veneer, inlaid with acrylic mosaic on the surface. The mosaics are constructed using basic geometric shapes. Originally ivory and rosewood were used for inlaying, but now acrylic is commonly used.

Thin and long strips of ebony, ivory, red wood, bone, and tin are stuck together to make the design. This craft was at one time used to ornament the doors of palaces and mansions; now it is also used to decorate wooden articles, especially boxes. This is not inlay work, but more in the nature of appliquè and involves no carving.