The large number of temples in Kerala and the doors, windows, and ceilings of most ancient taravads or ancestral homes show the high level of craftsmanship prevalent in wood-carving. The wood used is mainly deep-brown teak. These elegant taravads are the ancestral homes of the Nair community and are built in a specific pattern around a central courtyard called nalukettu. The rooms have massive teak doors, studded with brass. Rich carvings are found in the archways of these doors and the ceilings have scenes from religious epics, as well as flowers, foliage and animal motifs. A lot of sculptural and relief work is found as part of wood work done there. The motifs found in the woodwork are Puranic scenes and depictions from the epics, along with human figures, animals, birds, trees, and flowers. Rathas or temple chariots used during certain ceremonies showcase the artistry and technical mastery of the craftspersons of Kerala. Painting on wood is found in Kerala, especially in churches which are rich in wood carvings. Wood-carving is a highly evolved craft in Kerala, and the best examples are seen in the temples and churches. The tools used include the Kanupmattam – right angle Chinderam, planars, traditional bow and drill, chisels – flat, half rounded, V shaped and pointed; files – flat file, half round file and V shaped file and the saw. One of the richest examples of wood-carving is the Mahadeva temple in Katinakulam near Trivandrum. The ceiling is beautifully carved with Brahma, the god of creation, sitting on a swan in the centre. Elephant carving is also a specialisation here and elephants are produced in a variety of postures and sizes. Products include fluted coloumns topped by ornamental capitals, carved lintels, latticed shutters and slatted panels door and window shutters, brackets resembling stylized floral forms or composite animals, statuary, lion headed joists ,relief carved panels, wooden ceilings divided into panels, bearing a relief carved motif of a lotus, deity or dikpala, guardians of the cardinal directions; Idols and Decorative artifacts. Produced mainly in Chakai, Muttathhara, Manachaud, Palkulangara, Poonthura, Kulathoor, Karamana, Kurmampura, Vazhutacaud,Vellandad in Thiruvananthapuram district 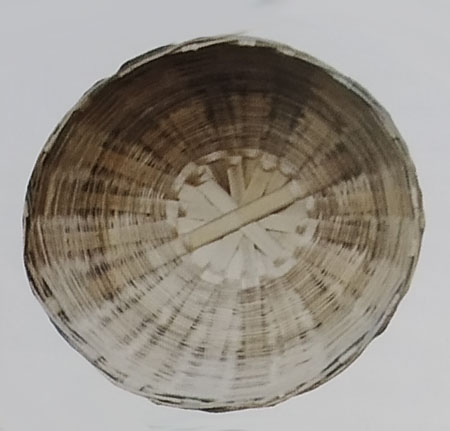