Dhaka cloth, beautifully patterned and coloured, is woven on a small loom that has a width smaller than those used for other woven textiles. Dhaka cloth – both the traditional black, white, red and orange and the new modern Dhaka textiles which use a wide range of colours and yarns – has become the best known of Nepalese textiles. Each of these pieces of weaving is a creation integrating new ideas with the old.

TRADITIONS
The cloth is mainly used in making men’s caps (topi), the traditional blouse worn by women (chaubandi cholo) and shawls (labeda sulwal). The traditional colours of Dhaka cloth are black, white, red and orange, but no two topis or shawls are identical: each has its own individual pattern, reflecting the creativity and skill of the weaver. The Nepali cap is lightly worn and brim-less, with a top creased corner resembling a peak, it is one of the symbols of Nepal and all officials wear it in government offices. While the formal cap is black, the daka topi is in many colours and elaborate designs.

Although throughout Nepal factory-made cloth has replaced much of the traditional hand-woven material for clothing, the demand for the individually made Dhaka cloth has continued. Most men invest in a new topi for special occasions such as harvest festival or the new year (dasain). Often something unusual is sought, for example, a commission to design a topi (strips of 18 cm X 70 cm) with a new pattern to be worn at a wedding. Sometimes a bridegroom will wear full national dress made from Dhaka cloth.

The Dhaka shawl (90-100 X 200 cm) is usually worn round the shoulders with the ends crossed over one shoulder so that the whole upper part of the body is enveloped; sometimes it is draped over the head. Since the early 1980s an amazing upsurge of Dhaka-cloth production has taken place since a wide range of yarns and colours became available to the weavers.

Most weaving takes place during the dry session, October to March, when little fieldwork is possible. Weaving forms part of the domestic scene and many girls know how to weave by the time they are ten years old. Often friends and relations work in groups, for companionship and mutual encouragement, and sometimes sharing some of the supporting posts for the loom.

NOMENCLATURE & HISTORY
One story holds that the colourful topi, which has largely replaced the plain, often black, topi, was introduced by a minister who returned with the idea from Dhaka (Bangladesh); others believe that the name was given to the cloth simply because many items, such as cloth and thread, came to Nepal from or through Dhaka in Bangladesh or because Dhaka muslin resembled the fine Nepalese weaving. However, the method of pattern weaving practised around Dhaka, called Jamdani, differs considerably from that practised by Nepalese weavers. It is also possible that Hindu weavers, fleeing from Dhaka at the time of the Muslim invasions, settled in or near Nepal and influenced Nepalese weavers. It is curious, though, that the main centre of Dhaka weaving, Terhathum, is in an area in the mountains that was difficult to reach until quite recently; it is also not in a border area. Nevertheless, according to the elders of a Terhathum weaver, this type of weaving has been known for generations, although formerly the patterns were applied mainly to the ends of sashes and waistbands rather than topis.

PRACTITIONERS & LOCATION
The main centre of Dhaka weaving, Terhathum, is in an area of the middle mountains some eight hours, walk from a road-head that was difficult to reach until quite recently. Nevertheless, according to the elders of a Terhathum weaver, this type of weaving has been known for generations, although formerly the patterns were applied mainly to the ends of sashes and waistbands rather than topis. Today some of the finest Dhaka cloth is woven by Limbu women from eastern Nepal, though some Rai women are also involved. The majority of weavers are women: very few men weave Dhaka cloth. In Kathmandu, Dhaka weaving is generally done in some factory units, whereas, in the hilly areas of country like Palpa, Dhankuta, Tehrathum etc., this type of weaving is all home-based.

Dhaka cloth is made by the individual weaver in her own home at such times as she chooses or when her daily and seasonal tasks in the home and on the farm allow. Further the women weaver can decide part of her own economic destiny which should be a factor of importance in rural development.

TECHNIQUE & PROCESS
Dhaka-cloth looms are of no standard size. There are regional variations of warping and weaving methods, but the basic principle is the same. The bamboo and woodwork are usually prepared by men who are members of the weaver’s family or friends. Among the permanent features is the upright bamboo post that support the loom.

There are various ways of preparing the yarn for warping: the hand-spun cotton yarn, which is the one traditionally used, is wound from the spindle on to a split bamboo cage spool to form a skein. Mercerised sewing cotton thread, manufactured in southern Nepal, is now used by many Dhaka weavers. As this is sold in rolls on cardboard cylinders, similar to bobbins, weavers can use them as they are, employing an even number at any given time in order to speed up the warping process.

SUPPLEMENTARY-WEFT INLAY (BROCADE)
The best-known method of Dhaka-cloth weaving is a plain ground weave with a supplementary weft of a different colour laid alongside the ground weft in the regular sheds in selected areas to create a pattern. For the white ground weft, weavers use one or more strands of single cotton or one strand of two-or-three-ply mercerised sewing cotton. For the supplementary weft they choose either several strands (six) single-cotton or mercerised cotton or two-ply embroidery cotton, two or three strands at a time. The main traditional colour are red, orange and black, with a little green and blue added sometimes. In the 1980s the locally manufactured acrylic yarn became popular: this brightly coloured yarn is preferred by many of the younger generation, especially for stiff taller topis.

TAPESTRY
Although most Dhaka cloth is woven with weft-inlay patterns, there are some weavers who employ various methods of tapestry. The coloured weft threads in this case are not supplementary but are woven back and forth in their own pattern areas to form the actual structure of the textile. The warp is less visible in this type of Dhaka, although not as hidden as in the textile generally referred to as tapestry, which is entirely weft-faced. One method of joining colour areas is that of dovetailing where two wefts go round a common warp end where the colours meet. But weavers also used inter-penetrated dovetailing where the wefts from the adjacent areas alternately pass into the other area the turn on an adjacent warp-end, rather than a common one, thus forming jagged outlines. Other weavers use double-interlocked tapestry methods where the different colour weft areas are joined by interlocking them in each shed: a ridge of interlocking loops will show at the colour joints on the working face – that is, the side facing the weaver – but is smooth on the other side.

Yet another method, where interlocking is combined with inter-penetrating, is used for some intricate topi patterns.

PATTERNS & MOTIFS
Many Nepalese weavers know about 100 basic patterns and invent new ones all the time. From bold geometric shapes to complex floral patterns some basic motifs – like the zig zag pattern – occur in endless varieties. Many patterns on the miniature (leaf 127 of the Nepalese palm manuscript “Astasahasrika Prajnaparamita”, dated A.D. 1015) can be rediscovered in contemporary weaving patterns.

The variety of Dhaka patterns is almost infinite – from bold geometric shapes and temple outlines to complex floral patterns. Only some motifs are given specific names, such as the temple (mandir) and elephant trunk (hatti sunr). Others are interpreted by the individual weavers as diamonds, zigzags, butterflies or flowers, or are just referred to as butta. No two topi strips are identical, and within one length of warp the weaver usually changes the pattern every 70 cm (topi length). This not only makes it more interesting for the weaver but also means also that he/she can offer a passing customer or shopkeeper a choice of patterns. She will cut off the sections required, leaving at least 15 cm of woven cloth: this is dampened to ensure a good grip and then rolled around the cloth beam for the weaving to continue. Although some basic shapes are similar, colour and composition are decided upon by the individual weaver without any drawing or plan, thus making each piece of weaving a unique creation.

One of the best-known topi-strip patterns is based on stepped diamond shapes, inta, along the centre. These are framed by broad, stepped lines and half-diamond shapes emerging from the selvage. According to Limbu weavers, this pattern is easy to weave and is often one of the first patterns for a beginner to practise on. An experienced weaver can weave one or two topi lengths per day with this type of pattern. A more complex pattern might take several days. The diamond appears in many other patterns and is arranged in such a variety of sizes, colours and outlines (smooth, jagged, stepped) and either joined up closely or kept separate – so that each woven strip has a different appearance, emphasised by the irregularities which occur in hand-picked patterns. Often patterns or colours are arranged diagonally, allowing the supplementary weft to continue upwards from patterns to pattern.

Diamonds or hexagonal shapes with a variety of centre patterns are woven into all over designs or linked up to form new patterns, often in such a way that the background becomes the dominant pattern. Positive and negative forms are freely interchanged from one weaving to the other. There are many different types of zigzag patterns and an even wider range based on the outline of a Nepalese temple (mandir). Often this is arranged in stripes and alternated with the elephant trunk or hatti sunr pattern, interspersed with cross designs. Another truly Nepalese design is that based on the national flower, Rhododendron arboreum, or lali guras. Flowers have been the inspiration for many weavers and are incorporated in various shapes into a multitude of patterns.

DEVELOPMENTS
In west Nepal, part-mechanisation of Dhaka cloth weaving has demonstrated that there is a market for mass produced inlay Dhaka cloth. However, it is also apparent that there is an expanding market for the inimitable individually woven Dhaka cloth strips from the kosi Hills – this demand is from locals, as well as from tourists and also for overseas markets. 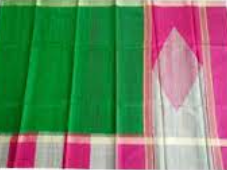