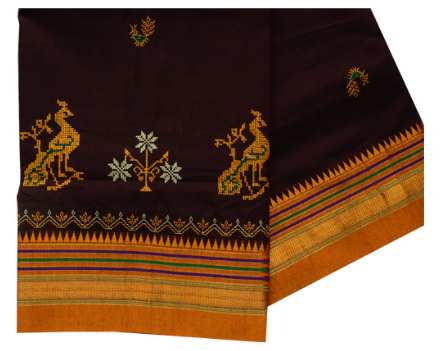 Cotton and Silk Weaving of Karnataka

Kasuti embroidery is a weaving art that is primarily practised in Uttara Kanara (North Karnataka). The weaving can only be achieved by measuring the threads of the weft and warp. There is no way to trace or implant the template as outlined in advance. Karnataka women looked to their surroundings for inspiration, selecting designs that appealed to their social, creative, or domestic impulses. The Gopurams (decorated entrances) of temples, the chariot and palanquin in which the deity is carried on religious occasions, the lotus, and the tulsi katti, which is the enclosure for the holy tulsi plant, are religious motifs found in this embroidery. Elephants with howdahs, peacocks with spread plumage, various birds, plants, and flowers are popular motifs.

The sarees, known as Ilkal sarees, have a wide silk pallu and border, with the main fabric being a thick, soft cotton. The motifs are the biggest and most closely spaced near the pallu. As the embroidery progresses into the main body of the saree, the motifs get smaller and more dispersed, eventually fading away with clusters of stars or simple dots.

The Kasuti embroidery is done in silk that was previously unpicked from the pallu’s tassels pendant. Later, it became commercially available. An ordinary sewing needle is used with great flexibility to produce a series of patterns on the fabric with coloured threads. Women are the only ones that perform the embroidery. Gavanti (line or double running stitch) and Murgi are the two types of stitching (zig-zag lines done with a darning stitch). The two sides are clean and matching. Negi is a popular running stitch that is used in large designs to create a woven pattern effect. Menthi is a form of cross-stitch that is used to create architectural patterns.

Kasuti embroidery is thought to have arisen in north Karnataka and spread across the country. There are historical traces dating back to the 15th century. Every woman was supposed to have Kasuti embroidery on her sari and blouse. Kasuti’s history dates back to the Chalukya period. The name Kasuti is derived from the words Kai (meaning hand) and Suti (meaning cloth), implying a cotton and hand operation. In the 17th century, women courtiers in the Mysore Kingdom were supposed to be skilled in 64 arts, one of which was Kasuti. Kasuti embroidery incorporates folk crafts inspired by Karnataka rangoli styles.