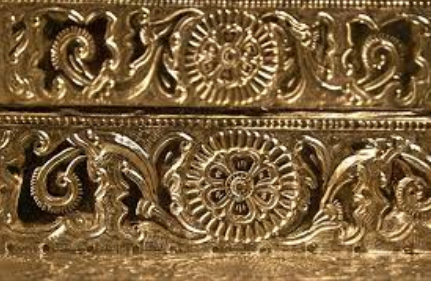 Mysore city in Karnataka is famously known as a centre for artisans practicing a variety of traditional crafts. One such craft which can be found thriving in this region is that of sheet metal embossing. Aspects where this craft can be widely seen is the prabhavalli, backdrops or arches behind idols in temples as well as the accessories and embellishments. The craft is even carried out on special occasions where the stone idols are sometimes partially or entirely covered with embossed metal in temple premises. In earlier times, doorways, idols, pillars etc. were adorned with embossed silver, gold or bronze. Accessories for idols that are crafted using embossed metal are crown, claddings/kavacha, trophies etc.

The metal sheet is placed and hammered on blocks of forms following which details are added either through the process of embossing or engraving. A rolling machine is used to create sheets out of silver and gold blocks before embossing. Bronze on the other hand can easily be found in the form of sheets.  Tools such as hammer, hacksaw blade, emery paper, chisels, punches, round files, flat files etc. are used by the artisans.

Vaas Kaam/Cane and Bamboo of Gujarat