Rosewood Inlay is a craft in which the desired designs are scooped out in the flat surface of the rosewood and natural wood of different colours are inlaid in the hollow spaces to form beautiful pictures. The meticulous process of carving on rich dark rosewood is a traditional craft from Karnataka, practiced mainly in the royal city of Mysore under the patronage of the erstwhile maharajas. Mysore city, the headquarters of Mysore district, is situated in the southern part of the Deccan Peninsula and forms the southernmost district of Karnataka state. The city is known as one of the garden cities of India and also known throughout the world as the “City of Palaces”. It is renowned for splendour of its traditional Dussehra festival. The district is the second richest district in forest wealth in the state. 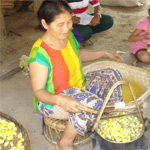 Jewellery and Jewelled Objects of Haryana