The history of roghan painting on fabric is centuries old. Roghan designs on cloth – with their embossed and shiny – look very similar to embroidery. The oil used for obtaining the pigment used in the painting is extracted from the seeds of the wild safflower: this is boiled for hours so that it becomes thick and oleaginous and is then coloured with pigments. The roghan or wax-like pigment so obtained is stretched onto the fabric by hand. It is then moistened with the fingertip and pressed onto the fabric. A special kind of dexterity is required to manipulate the roghan pigment threads on the cloth so as to obtain the required design.

This craft is practised by only a few artisans in Nirona, a small village in Kutch (Gujarat). The craft was earlier practised in Ahmedabad and Pattan, also in Gujarat, and in Nasik (Maharashtra). Roghan painted cloth was earlier referred to as Afridi Lac cloth. The designs found are geometric and floral with motifs of birds and beasts. Saris, furnishing and dress materials, book covers, and a whole host of other items are embellished with roghan. Due to lack of support, the craft is not being taught to the next generation and so it is dying out.

Tradition and History
The art of roghan painting on cloth goes back centuries. Local legend has it that this art came into India from the Afridis, originating in Syria; the route it followed wound through Persia, Afghanistan and Pakistan, and then to India. The craft became concentrated in the northwestern parts of India, and was practised mainly by the Muslim descendants of the Afridis – the product came to be called Afridi lac cloth or Peshawar lac cloth. Sir George Watt in his book Indian Art at Delhi, an exhibition catalogue published in 1903, found that a similar craft form was practised not only by the Afridis but also in Peshawar, Lahore and Pattan where castor oil was used and in Kutch where linseed oil was the base. In all these centres the craft was practised by Muslims possibly descended from the Pattans.

George Watt also described the ‘Afridi wax print’ process and how the oils were extracted using both hot and cold methods. It is noted that wild safflower or poli seeds were crushed to extract the oil and boiled for 12 hours after which they were plunged in water; as a result of this, it became a gelatinous substance called roghan. In the Kutch region of Gujarat, he noted that castor seed or khardi seeds were used for the oil-extraction and that this process was difficult as the results depended on a high level of skill and dexterity.

To quote from T.N. Mukharji’s Art Manufactures of India, published in 1888 for the Glasgow International Exhibition: ‘Another curious variety, which, though not cotton-printing strictly speaking, may be conveniently noted here, is the lac and colour painting on red and blue cotton fabrics produced in the Peshawar District. Blocks are not used, but red, yellow and other colours in a thick sticky pigment are applied in bold semi-barbaric patterns, on which, as they dry, abrak or powdered talc is sprinkled.’ He further notes that roghan was extracted from linseed oil and that the craft was not confined only to the Panjab frontier, but was also being practised by Hindus at Ahmedabad and Morvi, in the Bombay Presidency. At Nasik, similar kinds of processes were noticed – the use of a perforated stamp fixed at the end of a tube full of colour used to produce a pattern similar to the perforated cylinders used to make patterns in front of thresholds. The colour used was either in the form of a dry powder or mixed with linseed oil. When the paint dried on the cloth, dried mica was sprinkled over it. At Peshawar it was noted that the technique followed was a little different: the work was traced with a stick, there was no use of stamps or cylinders, and the quality of the colours used was very good.

Feliccia Yacopino has stated in her book, Threadlines Pakistan, that Afridi wax cloth was sold in the bazaars of Peshawar, Lahore and Karachi where it was known as ‘khosi’, from the word ‘khosai‘ (the dress of the Afridi women).

The colours used for roghan included trisulphide of arsenic for yellow, red lead oxide for red, white lead or barium sulphate for white, and indigo for blue. Powdered lime was added to thicken the runny roghan into a workable consistency and mica flakes – along with gold and silver leaf – were also pressed into the raised patterns for tinsel work. It has been recorded in George Watt’s book that the artisan makes the roghan paste into a small ball in the heel of his left palm with a six-inch metal rod. The stylus or the instrument used to transfer the designs onto the cloth is held in the right hand into which the Roghan is put; from this the coloured material flows according to the pattern being made by the artisan. Finger art roghan designs even than were done by free hand.

Even though, traditionally, roghan-designed cloth was used both in India and abroad for clothing and furnishings – as table cloths, household decorations, prayer cloths and fire screens – yet roghan was only a marginal tradition and not very well known.

Practitioners and Location
There are now only a few artisans in Nirona (Kutch) practising the art of roghan painting. These artisans have been practising this craft for generations. There are a few other families from Chobari village (also in Kutch) who also practice this craft. We spoke to Khatri Sadiq Bhai whose family has been practising roghan for eight generations. There are about four other artisans from his village who still practise this craft; however, when more lucrative opportunities are available, they are willing to abandon the craft. Khatri Sadiq Bhai himself left roghan painting for six years to set up a textile shop, but returned to practise his family’s traditional craft form again.

Materials, Processes and Techniques
The basic raw material used to make the roghan are the seeds of the wild safflower (carthamus oxyc anthus), and linseed or castor seeds which are pressed to produce oil. The seeds are all hand-pounded and then boiled for over 12 hours to thicken the substance: it is then thrown into cold water to get the roghan. The water in which the roghan is immersed prevents it from drying out. The roghan is then coloured with various dyes: red, white, yellow, blue and green are popular colours, while silver and gold leaf is used to create special effects. The roghan is made into a workable consistency by adding a quantity of lime to it. The practices followed and the materials used for the roghan painting have not changed over time, proof of which can be found from notes on the craft from almost a hundred years ago.

The chief tool used in roghan painting it is a six-inch metal stylus that has a pointed tip. The artisan places, by rough measure, about a teaspoon of roghan on his left palm; the roghan is then made pliable and of a workable consistency by using the palm as a palette and by briskly mixing it with the stylus. The stylus is then used to stretch and draw out the roghan threads on to the fabric to form the desired design through free-hand application or by following the lines of a pre-drawn design. Artisans with a high level of skill and dexterity work very comfortably from left to right as well as from right to left.

Interestingly, when the design being is painted, the stylus does not touch the surface of the cloth; the transfer of the semi-solid roghan thread is done with great deftness and skill. The cloth is held by the artisan from underneath and is moved forwards and backwards according to the needs of the pattern being laid out. With years of practice, this process can be made to appear very effortless. When the design made is intended to be identical on the two halves of the cloth, the design is painted onto one side of the cloth and the cloth is then folded onto itself: the design transfers itself in a mirror image on the other half.

When a solid patch of colour is required, the artisan allows the stylus with the dangling thread of roghan to move over the area in a single direction. So parallel lines of roghan are laid down next to one another and the threads are pressed down with a moistened fingertip: the threads thus adhere to one another and form a coloured patch. Colours are applied one by one and only when one colour has been used exhaustively is the next colour introduced. When Khatri Sadiq Bhai of Nirona demonstrated roghan painting, the effortless ease with which the design unfolded and took shape was a marvellous indication of the skill involved.

Design and Products
The designs found in roghan usually include geometric and floral patterns, with birds and beasts being depicted sometimes. The products made include saris, cushions, kurtas (long dress-like shirts), home furnishings, ghagras (long skirts), wall hangings, book covers, file covers, table linen and bed covers. Earlier there was a demand for roghan embellished products like chabla, dhranjo and other items of clothing; this demand has, however, given way to a demand for the items mentioned above.This unique but fading craft has a lot to teach us. Its use of different oil seeds in creating colour for textile embellishment is of value to all serious researchers, students and designers. The need of the hour is to create new products and markets for this craft, which undoubtedly has the possibility of increased growth and development. 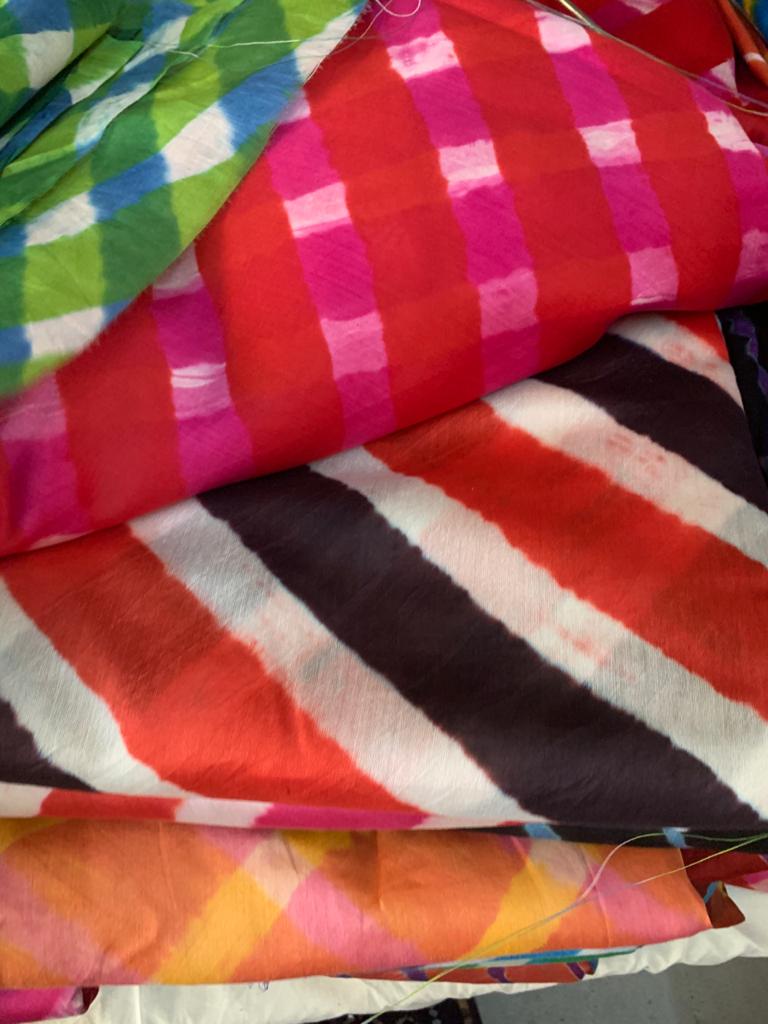 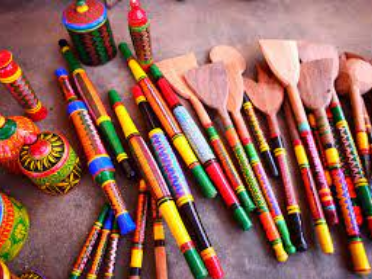