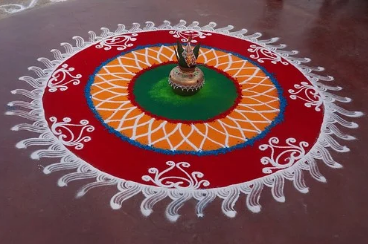 Rangoli (also known as Kolam or Muggu in southern India) is an Indian folk art. It is created during festivals such as Diwali and Onam as decoration. Using colourful flower petals, flour, rice, or coloured sand, colourful patterns are made on floors, typically near the entrances to houses or courtyards. Rangolis are a big part of Zoroastrian festivals as well such as Navroz, the Parsi new year and Khordad Sal, the birth anniversary of the first Zoroastrian prophet.

Rangoli is a depiction of different cultures, customs, and folklore that is said to bring good luck. Rangoli designs can vary from basic geometric patterns to deity impressions and abstract art. Northern India traditionally makes a square grid Rangoli, while Southern India makes a hexagonal grid Rangoli. In Northern India, chirodi (a type of white powder) is used as the base colour, while rice flour is used in Southern India. However, as a result of the blending of cultures and people, designs and colours are now freely used

In Maharashtra, rangoli is painted on doors to ward off evil spirits. Flower-based rangoli is made in Kerala during the Onam festival. Rangoli is drawn on the floor with rice flour on a regular basis in the states of Andhra Pradesh, Karnataka, and Tamil Nadu. The mandana is painted on the walls in Rajasthan. 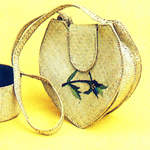 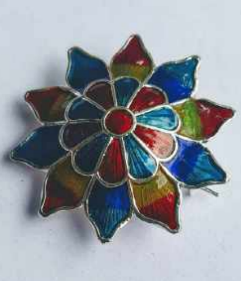