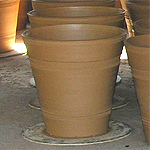 Laos has a well developed clay and ceramic pottery-making tradition. One finds entire villages dedicated to creating clay objects, using age old methods and traditions with pottery-making as the main source of income for the family.

Clay objects created take on both decorative and religious art forms as well as more utilitarian forms. Clay utensils are used both for storage (rice, water, fish, whisky, salt and spices) and cooking and range from simple terracotta, baked in open pits, to the more intricately polished and decorated glazed forms.

Traditionally pottery was made by village women, but this has changed and today one finds both men and women participating in the production process.

HISTORY
Excavations at several sites suggest that potters worked their craft as far back as many hundred years ago. Kilns and glazed and unglazed wares have been excavated from construction sites at Ban Pako near Vientiane, Ban Tao Hai (Village of the Jar Kilns) refered to as the Sisattanak Kiln Site, located just out side Vientiane. Some of the pottery has been dated to the Lan Xang period -shards of pottery with a pale, translucent green glaze have been found suggesting that high-quality celadon was produced. Excavations made in 1991 in the vicinity of Ban Xang Hai, on the outskirts of Luang Prabang, have revealed the remains of kilns and fragments of brown glazed jars.

Many legends explain the advent of pottery in the villages. In Ban Chan, three kilometers from Luang Prabang, one legend states that the first clay product to be made was mortar. Not long afterwards, the King of Luang Prabang ordered the villagers to make clay water pipes and big jars for wine and water, for use in the Royal Palace and temples. Soon the villagers became adept at working with clay and it became an additional source of income. The clay can be found near the village. Today, the pottery village of Ban Chan provides souvenirs and décor to Luang Prabang, the world heritage city. 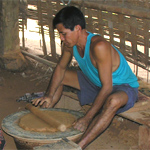 In Laos, one finds pottery producing villages, such as Ban Chan, Ban Thahine in the Luang Prabang, Attapeu and Vientiane provinces. In these villages, age old traditions and methods continue to be used for producing pottery both for local use and commercial markets, and can be openly observed by visitors.

In Laos, pottery was traditionally made by the village women and pottery traditions were passed down orally from mother to daughter for centuries in an unbroken chain. Today whole families work together to produce pots for both local consumption as well as commercial demand. 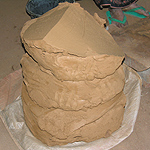 Different types of clay are available in Laos and often this is what gives an unglazed pot its colour and appearance. While all villages have their own distinct styles and methods, broadly the steps are as follows:

After the clay is obtained, it is thoroughly checked for stones and other impurities and these are removed before any other processing is done. The clay is then dried in the sun – a process that ensures that no lumps are formed or remain in the clay. Depending on the weather, this could take up to three or four days. The dried clay is then ground and stored or alternatively made into dough and used immediately. 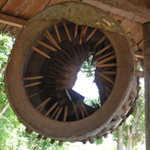 Lao potters traditionally did not use a wheel to make the desired pots or utensils. Instead clay is pressed into shape using the hands. Layers of dough were added to the original piece and the potter moved around the object, pressing the clay into the desired shape. However, now one increasingly sees the use of the wheel in the pottery villages.

Once a pot is completed it is dried in the shade, so that it does not crack. Leather hard pots are rubbed with a black stone to smoothen the surface, giving it an added shine. The pots are often varnished and put directly in the sun and completely bone dried, making them ready to be fired. Firing is done in an open pit with temperatures going up to 800 degree Celsius. The pots are arranged together and covered with layers of rice straw, which is the set on fire.

The baked pots are decorated or coloured according to the order placed or the fancy of the potter. Pots are coloured using natural materials like the extract of tamarind seeds or quite often manipulated during the firing process by placing them in proximity to different materials which stain the pots accordingly. Quite often pots are decorated using typical designs – motifs or special marks using rattan or old coins. Originally each village had its own specific designs and motifs but nowadays this distinction no longer holds and different designs are readily available everywhere, although villages still advertise their designs. For example – spiral design, drum design, geometric design. 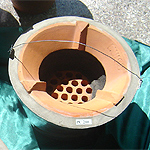 Lao potters today make flower pots, unglazed water pots that keep the water relatively cool, pots for fermented fish and home made whiskey, items for household decoration, religious icons, crockery for cooking and tiles for flooring and roofing. Products are made on order and priced according to their sizes and the intricacy of designs.