The hooka, an elongated and aesthetically decorated, traditional smoking pipe, could be seen in use all over Nepal till just a few decades ago. These artistically carved smoking pipes crafted in Baglung were famed all over.

RAW MATERIALS
These elegant smoking pipes or hookas were made of nigalo, a variety of bamboo that grows mainly in Galkot, west of Baglung. The nigalo (typified by Drepanostachyum intermidium) is a small-statured species of bamboo with small culms. This long tubular plant has its sections separated by nodules and has bushy leaves at its tips. It is found between 1,200 m and 2,400 m and can be cultivated. In the past a large proportion of the population of Baglung earned their living by pipe-making; however it is now difficult to find many pipe-makers.

The hookas traditionally had a silver plate positioned at either end with the plate on the smoking end carved to resemble the mouth of a lion or tiger.

PROCESS & TECHNIQUE
To make the pipe, the nigalo branch is straightened. and its curved tube is smeared with rape-seed oil along the nodes and warmed over a fire along its entire circumference. As the pipe becomes sufficiently hot, one of its ends is pressed with the leg while the other end is stretched by hand to the required extent. This work requires great dexterity and skill. This process is repeated till the tube is fully straightened. Care is taken not to char the tube during this stretching operation. Thereafter, the tube is rubbed with ash, washed with water, and dried in the sun.

Next, the carving on the pipe is done. Two kinds of tools are generally used for the carving: a sharp tool is plied to engrave rings on the pipe at a distance of 2 to 3 inches; and a pointed tool is used to engrave various designs between the rings. The tools used in the carving are of indigenous origin. The designs include the pictures of men, animals, birds, flowers, trees, serpents, and other intricate artistic patterns and designs. The carver is, in fact, an artist. The designs do not become visible in the beginning as the carving is initially done superficially on the pipe. Two days of hard work is required to engrave designs on the pipe.

Powdered charcoal is mixed with oil to form a paste – the paste is applied over the designs and rubbed vigorously with a rag. The charcoal powder gets jammed into the scratched lines. When the oil is wiped off with a rag, the designs become distinct – the charcoal penetrates into the carved areas. The colour of the designs on the pipe is black and with the rubbing and wiping the pipe develops a glossy veneer.

The pipe is next drilled through along its inner nodes. A long iron wire is heated till it is red-hot and then inserted inside the pipe. The hot wire causes the inner nodes to burn. (This part of the process causes a lot of smoke.) This drilling is usually done from both ends. The pipe is thick at one end and thin at the other. The pipe, which is now ready, is taken to a goldsmith who fixes silver plates at on both ends. The plate on the end that is connected with the hooka is called kulpi.

The making of smoking pipe shows how seamlessly can technology and art blend. If the carving aspect of the pipe is art, and dyeing and straightening aspects constitute technology. The application of charcoal as a dye can be considered as a significant achievement. 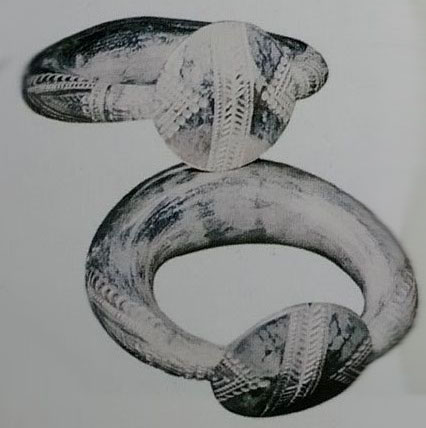