One of the most famous motifs used here is the amba butti mango motif. In this centre, wax resist, block printing, and indigo vats are still used. The blocks are carved up to 10 cm in depth and can carry enough wax solution for a number of imprints. The motif range found here is limited but the designs are original and dramatic.

In the 1960s the twin villages of Ummedpura and Tarrapur, in Jawad Madhya Pradesh were celebrated for their wax resist block printed textiles, called Nandana/Nananawith its own a distinct motif directory and color palette.  Data revealed that there were 57 units employing over 1000 persons. By 2009 their were craft was already endangered with only 4 workshops operating, by 2020 these have declined to only two, a situation of severe endangerment.

With 5 auspicious motifs  each with their own name – mirchibutta, dolamaru, champakali, jalambuttaand lafarma with over 14 steps in the process of wax resist Nanana prints it was used for printing  the traditional clothing of the Bhils and Bhilala of the region  – jowarilugda the set including  the large shoulder mantles and the lehnga or thick cotton gathered long skirt. 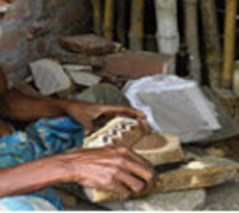