The legendary nakshi kanthas are the best examples of the embroideries of Bangladesh. Although embroidered kanthas are very decorative their chief motive traditionally was thrift and economy combined with aesthetics, the idea being to utilise old and worn out cloth by sewing them together meticulously with close stitches and embroidering them so that not a single piece of fabric was wasted. The idea was to strengthen old and worn out cloth so that it could endure further usage. The care and artistry with which the embroideries are made transformed the kanthas from their original state of patched up rags into wonderfully beautiful creations of design. Nothing embodies the tradition of women’s creativity more than the nakshi kanthas. It also symbolizes how women preserve, recreate and renew life forms. Stories are told of how women met together in their courtyards, to stitch the kanthas for family members. They stitched the layers together with borders in coloured yarn taken from the sari borders; this was followed by stitching the motifs which represented familiar items, ritualistic symbols or imaginative scenes. It is said that almost fifty different stitches have been used in kanthas.

As Gurusaday Dutt in his writings on Kantha said

The name “KANTHA” signifies a poor man’s wrap consisting of old used up cloth patched up and sewn into a single garment. It seems probable that patch-work kanthas constituted the original form of kanthas and that kanthas of a decorative “appliqué” type were evolved from this…. From this original sense of the term in which it is still applied, it is used now particularly to mean quilting of coloured embroidery made by the Bengalee women of all castes throughout the province for various household purposes. The art of the kantha furnishes an illustration of the wonderful patience, craftsmanship and resourcefulness of the village women.

Dr. Stella Kramrisch has described a mythical story to indicate the origin of this art form. According to this story, there was a guru by the name of Kanthalipa (plastering guru). By caste he was a sweeper. He used to collect old rags and torn cloth which he found while sweeping. One day a needle pricked his finger; it hurt so much that he started crying. Hearing his wailing, a dakini (witch or spirit) appeared before him. “She reproached him: ‘If you cry at such little pain, how will you be able to bear the pathos of rebirth over and over again? Kanthalipi answered her: ‘That is true but I do not know what I should do, ‘The dakini advised him: ‘The sky is nothing but a great void in endless space. Between the earth and the sky is also a vast emptiness. While sewing the pieces of rags you should achieve unity of spirit and purpose with all living creatures in the world. The sewing of rags symbolises the use of all discarded things. To do this you need to consolidate your deep feelings and knowledge. Sitting in the void you will have to combine your thoughts and knowledge with the help of the needle of kindness. The pieces of rags sewn together to make a new cloth of new kantha will turn into a complete piece. Similarly all the universe’s living things will be able to create their own entities.

Though its origin is uncertain, the kantha is an example of strange contradictions. An endeavour of thrift in as much as it is the re-use of old fragments, it is at the same time a product expressing the devotion and rare skill of the maker. Stella Kramrisch explains the patching of old cloth as “a symbol of unification” and “a restitution of wholeness”, a domestic rite performed by women. Almost a recreation of order out of chaos, the kantha is an invocation to the gods, and a protection from the evil eye. As with other areas of folk forms the dating of the beginning of kantha embroideries must of necessity rest on inferences from folk lore, from ritualistic and literary sources, from ancient songs and the stories spun by bards, endeavours by present day researchers to establish origins of the craft from descendants of the embroiderers invariably brings a reply from the simplistic folk artist, “It is a very old skill; my grand mother’s great grand mother used to make such lovely kanthas.

The word kantha has no satisfactory etymological root and yet it is widely understood all over the Bengal region as a multi-layered wrap or spread, stitched with minute needlework to obtain a thickness which reinforces the worn out cloth of which it is made.

Distinguishable forms of embroidery began to appear regionally, and just as the material varied depending on the loom cloth available in each district, the winter temperatures of each area, the influence of ritual and custom in household life, and the leisure time available to women of various classes, so emerged the types of kantha, from the smallest arshilata (cosmetics wrapper) to the magnificent ceremonial nakshi kantha prepared for the bride and bridegroom. Although nakshi kantha is commonly made by all women, the more elaborate ones are made in the western districts of Bangladesh, in Jessore, Kushtia, Bogra, Pabna, Mymensingh.

Nakshi kantha embroideries all over Bangladesh have common factors in stitching, format and composition. In the structure of the kantha, its outer contour sets the border for the embroidery planned. The embellishment takes form according to the dimensions of the fabric, as a square, an oblong, or rectangle. Then follows its intended use, as quilt (lep), large spread (nakshi kantha), puja floor spread (ashon), cosmetics wrapper (arshilata), wallet (batwa, thoiley), cover for Quran (ghilaf), floor spread (galicha), clothes wrapper (bostani, guthri), dhakni or cover, ceremonial meal spread (dastar khan) , prayer mat (jainamaz) and pillow cover (balisher chhapa or ohar).

The boundary of the kantha’s shape is perhaps the only constraint to the embroiderer, all else is left free to her imagination – to use language and imagery from the store house of memory and fancy. Women’s lives may have been circumscribed by their homes, but their minds were open to the world beyond. Thus in some older kanthas, are embossed figures of Company soldiers on horses, or Nawabs smoking hookahs. The kantha stitcher’s own dreams are patterned in the form of the sun image, of flora and fauna. Sometimes, the maker owned her work by signing her name or stitching a proverb on one side. In the centre of a large Nakshi Kantha was usually to be found a mandala, within multiple square borders. A replica of a temple, a place of worship or an icon would rest within the mandala. Many of the nakshi kanthas represent a mingling of cultures, with a Hindu rath and a Muslim tazia placed parallel or facing each other, or with a mixture of other religious symbols. 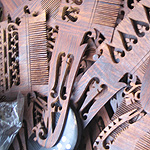 Clay and Terracotta of Haryana