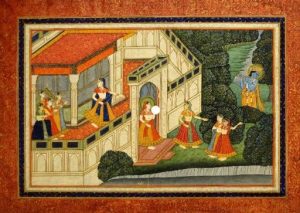 There is an enormous Mughal influence on the traditional heritage of Rajasthan. The miniature paintings that were crafted, depict royal courts, palace proceedings and hunting performances in the midst of  the natural environment. The artists used to accompany the rulers on their military expeditions to record their prowess. During this time, royal portraits of the rulers were also commissioned.

Following the Mughal period, many paintings had themes depicting Krishna Rasleela, Krishna with gopis were made. Bright and vibrant, naturally obtained colours were used. Gold and Silver was heavily used in order to depict the metallic work done on the architecture of the Mughal times. The most common fabric for miniature paintings was silk, followed by cotton. Brushes were made of squirrel hair. Colors were extracted from different stones by the process of crushing and grinding. It was later mixed with gond (adhesive) to convert it into a liquid form.

Miniature paintings have been in existence in Rajasthan for centuries. The various schools of painting in Rajasthan are:
Kangra School: The materials used are real gold, stone, and water colours which are then painted on old handmade paper. The outline of the subject is drawn with a pencil. Separate colours are filled in and the painting is rubbed on glass. Shading is done later. The last step is face decoration. Gilheri or squirrel-hair brushes are used for painting and real gold and silver are used to impart the glittering look to the painting. These paintings developed under the patronage of various rulers; presently Jaipur is an important centre Jodhpur School: Here also real gold and stone colours are used on old handmade paper, with love scenes being the most common motifs.
Mughal School of Painting: Real gold and stone colours are used to paint on silk. Love scenes and the Mughal durbar are depicted. Nowadays these paintings are also done on wood and marble stones. Jaipur School: These depict the portraits of kings, durbars, and gods and goddesses on old handmade papers with real gold and stone colours.
Mewar School of Painting: These depict hunting scenes which are shown on cloth and handmade paper in stone and stone colours. 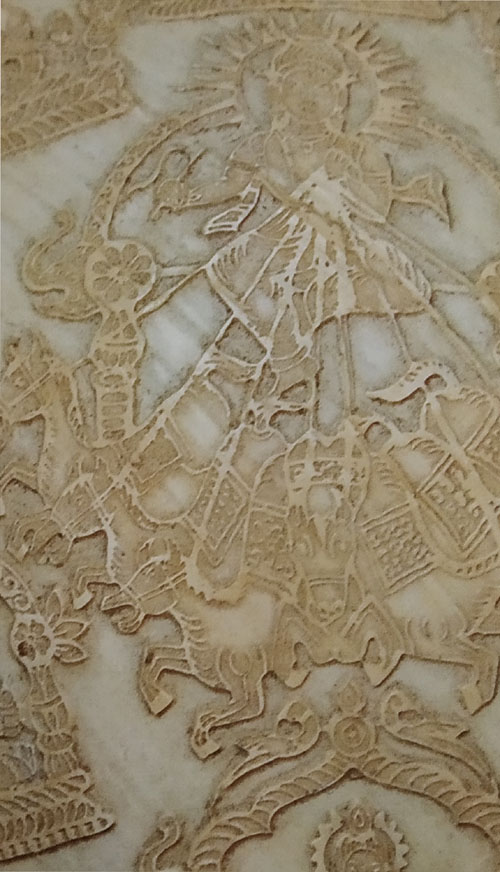