Metal Icons, Lamps and Other Castings of Kerala

The Moosaries, the community of traditional metal workers create idols of various Brahmanical deities for temples and homes in Kerala. Casting in bronze or a  combination of bronze and brass they use the lost wax process/cire perdue. The icons follow strictly the iconographic and iconometric rules as laid down by the canonical text, the Shipla Shastra ; where the  system of measurement is based on the unit as the tala, the distance between the hairline and the end of the lower jaw.

The process begins with the preparation of a mixture of pure beeswax, resin from a tree and groundnut oil. Using a spatula, knife, and scraper, this substance is fashioned into the pattern; the head, body and limbs are thus individually fashioned and joined. Wax cross strappings and runners are then affixed at appropriate locations to strengthen the wax pattern as well as to facilitate the flow of molten metal into various parts. The surface of this model is now coated with layers of various clays to form a completed mould containing within it the original wax pattern. This is heated in an open ground oven fuelled by cow dung cakes so that the molten wax drains out through the runner. An alloy of copper, brass and lead is made; the lead grants malleability thus facilitating the chiseling and engraving of the icon while the brass is added to the copper to lower the melting point of the alloy and to add and enduring luster to the finished product. This molten alloy is carefully poured into a previously heated mould; once cooled the mould is broken and the details of the idol are engraved. The metal surface is smoothed with fine grade emery paper and cleaned with a solution of tamarind and soap nut; and finally, the piece is brushed with polishing sand and water.

Bronze rafter shoes are a peculiarity of Kerala. These are used to protect the outer ends of rafters

Kerala is also known for its distinctive bell metal metal lamps which are free standing and portable, ceremonial as well as for domestic use; these are cast using the lost wax technique. Often the lamps that are multi-tiered and floor-standing are embellished with a garuda, swan, or peacock, or else with the figure of a god or goddess and are classified according to the motifs they bear – the deepalaxmi shaped in form of a graceful lady holding a lamp, mitevilakku with its distinct peacock pattern, the hamsavilakku resembling the swan and the vimanavilakku shaped like a tower and connected by a chain,  the changalavattu or the peacock lamp with the animal’s body serving as a reservoir for oil and the tail as the handle that is now used for processions in temples but was initially held before the old rulers and aristocrats when they went out in procession; Teertavalli  the lamp with a yoni or vulva like receptacle and a spout; Armapakshi  named after the motif of the bird of abundance ; Kurishivilakku – lamp with stylized Christian cross (kurushi) ; Nagaradhanuvilakku – snake shaped lamp ; Kuttavilakku – lamp for temple procession ; Tookavilakku  hanging lamp; Koddivilakku – lamp to light the temple lamp; Tiripazhadakacheri – lamp that has spouts for wicks ; Kadaplave – lamp shape based on the small jackfruit .

Hanging lamps in various sizes, oil lamps, and changalavattas or the Greek lamp are highly sought after. The beautiful lamps which are made for the prayer rooms and temples are known as nelavilakku and thookuvilakku. Those pertaining to the temple are the archanadeepa or votive lamp, the aratideepa or prayer lamp; and the deepastambha or pillar lamp that is used at the entrance of the sanctum; tiripazhadakacheri or the small lamp with five spouts for the wicks, a kavaravilakku or lamp with three receptacles; the vilakku or ceremonial lamp, usually of cast bell metal is used in homes as well as temples; they may be lit before and image of a deity as guests, or used to signify the presence of the fire god Agni. Kurmimangalam traditional lamp

Some lamps made for the temple courtyard are over 5 feet high and appear to be simultaneously ornate and austere: they have plain smooth lines as well as a series of circular recesses to hold oil and wicks.

Other items include jugs, tumblers, paan boxes, and lime jars of many varieties. The chilambu are hollow cast and contain small metal balls that create a rattling noise when the ornament is shaken;  Karpooratatta – vessel used to burn camphor; Dhoopakal – vessel for buring incense  and domestic utensils like Appakava – vessel used for cooking urmiappam;  Kollabmi – spittoon; Cooja – container used to carry milk and water and the Kindi – vessel to pour water. Trivandrum, Irinjalkuda, Trichur, and Kasaragod are the main bell-metal centers.

Koftagiri, the inlay of a light-coloured metal on a darker metal surface resembles damascene and was popularly used for weapons and arms. In this process a lac surface is fixed on the metal and after drawing the design with a chisel it is inlaid with gold and silver threads. The metal surface gets a blue-black gloss after application of lime juice and a sand mixture. Utilitarian and decorative articles are made with this technique which is practised in Kerala by the metal artisans. 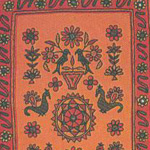