Compared to other crafts, black smithy is a relatively new to the Nagas. There is no iron smelting, but smiths are found in all tribes practicing as individuals, using imported iron obtained in the form of old tea garden hoes and other iron blades from the plains. There are usually two or three or even more blacksmiths in larger villages who either live on it alone or combine it with the cultivation of crops.

The principal articles manufactured by the Naga blacksmiths are agricultural implements like dao, axe, hoe, scrapper, sickle and weapons like spear head and butt, arrow head and musket. The largest quantity of articles produced falls under agricultural implements. The manufactured articles are mainly for domestic use. Muzzle loading guns and a variety of pistols are also made.

The spear and dao are important weapons of Nagas. The shape and pattern of both vary from tribe to tribe. The dao is a multi- purpose weapon. It is used for cutting trees and fowls, chopping meat, carving-wood and killing enemies. It consists of blade and wooden – handle. A complete spear is of iron. It is used in hunting and war. Ornamental spears for dancing are all crafted locally by the Konyaks. These are decorated with goat’s hair dyed bright red with manjit and blue from indigo.

The tribes that practice black smithy are the Konyaks, the Angamis, the Lothas and the Rengmas. In the olden days, tradition required a Naga smith to observe food restrictions while at work; this is no longer followed.

The Lothas though they practice the trade, regard it as a very unlucky one and believe that no blacksmith lives long after he stops work. The craft is restricted to the families, members of which have been blacksmiths in the past and as a result the Lotha blacksmiths are few and far between.

The Rengmas are considered the best Naga blacksmiths. In the olden days Rengmas were probably the only Naga tribe who smelted iron by boiling and heating the stone, which contained iron-sand.

The Konyaks are expert in black smithy. Apart from spears, daos, knives and hoes, they make muzzle loading guns and an imitation of pistols. They can prepare gun powder for these weapons, the process of which need not be described here. They make, in the same smithy, representation of human head with brass for personal decoration, which is worn as a necklace by a warrior. 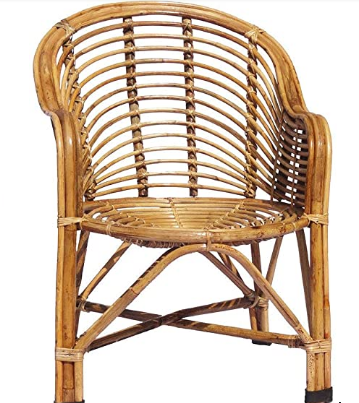