Mats and Baskets of West Bengal

Madur is the most popular of the mats made in West Bengal. It is woven mainly by the weavers of the mahishya caste in the southern parts of the district of Midnapore which covers the whole coastal area of West Bengal west of the river Ganga. The madur mat is woven on a simple bamboo frame-loom. The warp is cotton thread and the weft is a thin soft reed called madur kathi, which is cultivated in the Sabong, Ramnagar, Kholaberia, Sadirhat, and Narayan Chak in Midnapore district.
The three types of madur mats of Midnapore are ek-rokha, do-rokha, and masland. Do–rukha has a double madur kathi weft, is thicker than the simple ek-rukha and is more comfortable to sit or lie on. Masland is a finely textured mat, which is made with carefully selected reeds. It has two borders of beautiful, geometrical designs, sometimes in a deep magenta but usually in self-colour, and the designs show up through the texture of the patterns.
Muslim women of Ilamhaza in Birbhum district make palm-leaf mats with beautiful, geometrical designs in magenta, green, and blue. They use deft calculations and arrange the narrow strips to form parts of a broad design that fits in beautifully as the strips are joined together to form a whole mat. Large chatai mats are made from the fan-shaped leaves of the palmyra palm. These are woven with the flat strips of the leaves as both warp and weft. They are made and used extensively in Birbhum, Bankura, and Purulia districts. Shitalpati mats are made from mutra cane grown mainly in the Cooch Behar district.
The baskets of West Bengal are chiefly made out of bamboo; the other materials used are certain varieties of grasses, straws, and palmyra leaves. Baskets are either plaited or coiled. In plaited basketry the warp and weft are made to interweave in various ways. When the warp and the weft pass over each other singly, a check weave is obtained. When each weft passes over two warps and goes under two, the weave gives a twill effect. From the basic weaves, hundreds of weaving patterns have evolved.
Besides bamboo, coiled baskets are also made with a tall flowering grass called kash or keshe. Keshe and other straw baskets are made by rural Muslims. The tall keshe grass blades are spliced together to form a rope-like core material as thick as a pencil. The basket is built up of a continuous spiral of the core material from the base upwards, stitched together in different patterns with binder materials like the skin of some creeper or the strong rib of the date-palm leaves. The shape of the basket is determined by the way the spiral is let out from the foundation. Basketry in West Bengal is practised by members of the lowest caste or community known as doms, namasudras, and bagdis, along with poor Muslims and tribal people who live in the hills and forest areas and at the periphery of larger village communities. The crafts are pursued to meet the needs of the poor; basketry is a family craft and a community activity. 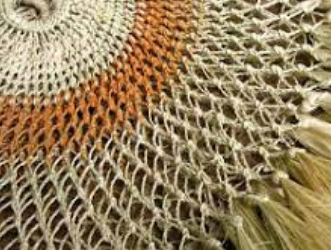