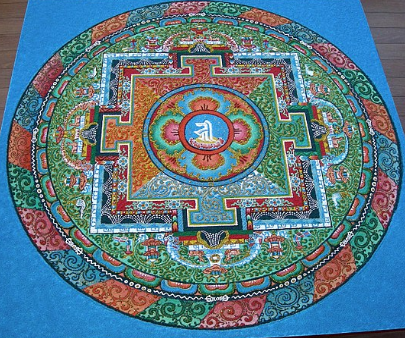 Mandala in Sanskrit means “circle”. A mandala is a sacred symbol made with abstract geometric patterns. It holds important symbolic significance in various cultures of south-east Asia relating to Buddhism. Mandalas are used in various spiritual traditions to help practitioners focus their attention, as a spiritual guidance tool, to create a sacred space, and as an aid to meditation and trance induction. Mandalas first appeared as an art form in Buddhist art created in India during the first century B.C.E.

The mandala is a map, chart, or geometric pattern that depicts the cosmos metaphysically or symbolically; a representation of the universe. It was originally intended to be a model for the organisational structure of existence itself, a cosmic diagram that demonstrates wholeness, the connection to the infinite and the world that extends beyond and within various minds and bodies.

In Hinduism, a mandala, also known as a yantra, is a square with four gates containing a circle with a centre point. A yantra is similar to a mandala, except that it is typically smaller and uses a more restricted colour palette. It could be a two-dimensional or three-dimensional geometric composition used in sadhanas, puja, or meditative rituals. It may also have a mantra or prayer in its design.