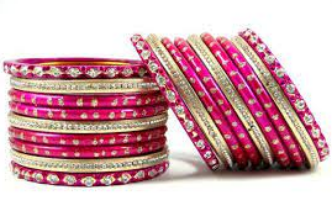 The main industry for lac is centred in Bihar and involves five million people, mainly local, aboriginal tribals. The Hindu lac bangle workers belong to the hereditary caste called Laheri or Lakhera, who live in Bihar, West Bengal, Odisha, Madhya Pradesh and Maharashtra. In northern Bihar about one hundred tons of refuse lac (called kiri) which remains in the sack after squeezing, is used for bangle cores and the better quality lac is used for decoration. Lac bangles are worn by married women of the aboriginal tribal people of Bihar including Bhumij, Mo, Munda, Oraon and Santal tribes.
The lac bangles have an inner-core or greenish-brown refuse lac, which is covered by a relatively thin layer of better quality coloured lac. Core lac is strengthened by a filler like white clay (safed mitti) or talc powder (abrak). Purer lac that covers the core is mixed with lithopone a white opacifying agent/pigment consisting of zinc sulphide and barrium sulphate with a colouring pigment. The dry ingredients are heated, mixed together, kneaded and pounded with a mallet, a process repeated until the mass is a homogenous, dough-like lump (dala).
After further heating and shaping, the lac is stretched and the diameter is reduced to bangle thickness and finished by rolling across a flat surface with a flat shaping tool (hatta). The bangle-lengths are then cut and sometimes the long lac rod is wound spirally on a wooden forming mandrel. The spiral turns are cut and the results are shaped into a bangle. Shapes are done by pressing the lac length into coloured grooves on each side of a wooden forming block or mould (khali). The lac is forced into the groove with the hatta to take on the shape of the groove. The ends are joined to form the bangle. Muthiya a conically tapered shaping mandrel corresponds to women’s bangle sizes and the lac is shaped into bangles on this. Separate narrow lac bangles (chudian) are often worn in a set or mutha or joined together as unit or bandhachuri.
Patterns are created flat or stamped in relief in lac coloured differently from the base. Several colours are combined to form a cloud or marbleised pattern (abrikam). Small stamped metallic units or patterned metal strips are heated and fixed to the base. Glass beads, decorative wire, small bits of geometrically shaped or flower shaped mirrors are used as embellishments; they are also decorated with gold foil, wire and glass seed beads.

Raw lac and shell lac are produced in large quantities in the forests of Bihar. Three kinds of raw material, kusum, palash and bararey, are available. Of these kusum is considered to be the best lac. Wooden products worked on the lathe — like boxes, legs of beds and stools, and bangles —- are all decorated with lacquer. Each area specialises in different designs. Designs of bangles in Sursand in Muzzaffarpur district in north Bihar retain the traditional colouring patterns and designs. Lacquerware also has ritualistic connotations in Bihar. The vermilion container used at marriages is made of lac. A community called laheris makes these round or oval shaped containers called sindurdans. Fish, chakras, and dancing peacock are used as embellishments. A nose ring box often given to a bride at her wedding is a round conical ceremonial box with symbols of fertility and longevity engraved on its red body. Other colourful and well-ornamented items include the chappati box and dry-fruit containers, bangles, and other ceremonial objects, unique both in colour and design.
After turning and colouring the object on a lathe, fine decorative linear patterns are engraved on the surface of the articles. The colours used are generally red and black and the objects made are bowls, boxes, lamp shades and trays. Traditionally, the first application is of followed by red and then the final coating is with black. The colours that emerge depend on the combination of the lacquer colour coats under the final black. This gives the product distinct and unusual look. 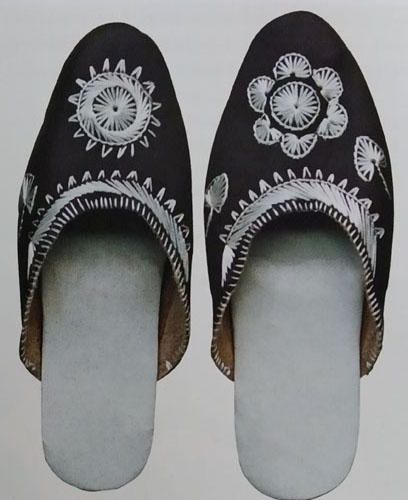