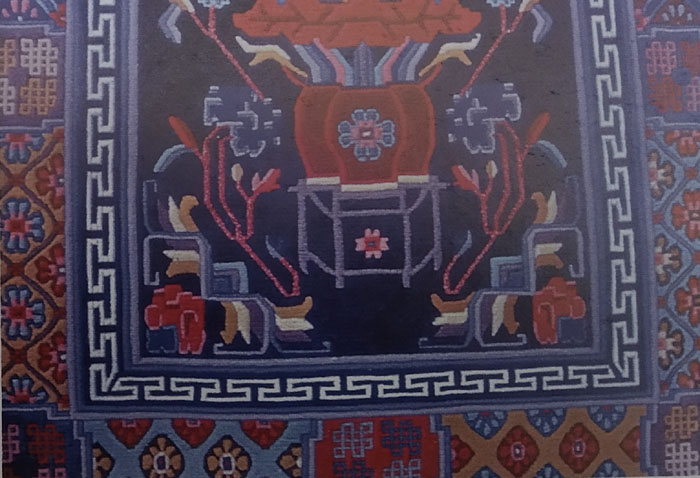 The carpets woven in Ladakh are an essential part of their culture. The Buddhist community in Ladakh makes carpets primarily for personal use. These pile carpets are known as Khabdan. These are made of 48 knots per square inch on a vertical loom. Loops of woollen yarns are created around an iron rod, which are later cut with a sharp knife and the rod is removed creating a pile surface. The styles and designs are influenced from Chinese and Mongolian, motifs as their was a trade and political history from 10th century onwards. Some of the motifs derived from this influence are the duk/dragon, rgya-nag lcags-ri (inspired by the Great Wall of China), snow-lion and the yungdrung (interlocking swastika border). Khabdan carpets are widely used in living rooms and prayer rooms of Ladakhi household and monasteries. Religious motifs such as  swastika is made at the center of khabdan for lama with orange and red color.  The craftsmen make carpets and saddle rugs in Tibetan Refugee center at Choglamasar town and at Leh town in Ladakh. The basic tools required are thisha /vertical frame loom, dhunki /hammer, chamba /scissors, tee/knife, chakda/rod and panja /beating device.