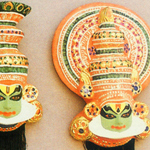 Kathakali dance form of Kerala is a colourful dance drama and one of the seven classical dances of India. The word kathakali literally means story-play. This dance form is noted for the elaborate make up, detailed face gestures, attractive costumes and well defined body movements. In Tradition, Kathakali represents the narratives of the exploits of various deities and demons. The main center for production of the accessories is Payyanur  in  Kannur district:

The dance of Kathakali has the most outstanding head-gears known as kiritams, produced on a large scale to suggest the supernatural powers of the character. The inner portion of kiritam is made of cane to ensure a good fit, and the body is carved from a durable kumizhi wood. The wood is hard and does not chip easily. It also ensures long life of the headgear and allows intricate detailing thus making it ideal for making head gears. The kiritam and other wooden ornaments worn by the performers are intricately carved with glass, stones, gold and silver foils, bead and peacock feathers. These are designed as per the qualities of the dancers: pacha (green) is benevolent and noble; kathi (knife) symbolises evil and demon-like characters. Each of the head-gears have two types of coronets, of two superimposed domes ending in a bud-shaped finial, a  large circular disc behind it, and a halo between the coronet and the disc. It is carved out of wood and from the hollow bottom up to the top of the first dome, every row is decorated with closely knit silver beads on a red scarlet base and beetles’ wings  set vertically in parallel rows. Glass pieces fixed on aluminium foils, large glass flower petals, and small silver beads are in the centre. Ornamental silver fringes are above the peacock shape made of green glass pieces, between the top of  the second dome and the finial. The top of the dome has concentric circles with the rows of decoration repeated. The disc is like a perfect piece of jewellery, is picturesque on both sides, and has a circular row of vines of golden stems and leaves, green buds, grapes with peacock feather stems, and a golden circle of foils converging on a round piece of glass in the centre. The appearance of the convex shaped rising circle of vines is like a fully  blossomed flower.

The players who come in the next category have beards of three colours: red, white, and black. Red bearded characters are vicious and vile, white bearded characters are strong, gentle, devoted, and loyal (like Hanuman), and black bearded characters are the destroyers (like Kali), and include hunters and the like. The characters with the red and black beards have large head-gears with decorations more or less similar to the previous headgear. There are some differences: the edge of the disc is decorated with woollen tufts, their colour is same as that of the beard, the base of the peacock stem is rolled into oval shaped flowers, and in place of the vines, grapes are fixed on the disc. Hanuman’s head-gear is like a Chinese hat with two domes, ending in a bud-like finial, adorned with tassels. The rest of the frame is in cane and the outer surface is covered by white flannel while the bottom with is covered in scarlet and has four lines of silver ornamental fringes suspended in concentric circles and a silver crescent. Long artificial locks also float down.

The head-gear of sages or rishis consist of two domes, the lower being larger. The usual adornments are there along with twisted coils and, in addition, there is a rudrakshamala  (rosary of several faceted seeds) encircling the dome. The hunter’s head-gear resembles an expanding lotus,  the cane frame rising from the bottom, covering almost half the height. This is covered with a dark cloth which is decorated with silver petals resembling the screw-pine blossoms.

Krishna has a special head-gear of a conical hemispherical dome with a woollen garland of different colours encircling its tip. Over this are fixed the eyes of peacock feathers to create the form of an expanding lotus. There is has a margin of oval shaped flowers formed by peacock feathers. An oval piece of blue or black ornamented cloth hangs behind the coronet and forms a beautiful cover.

The folk dance of Malabar, Theyyam literally means ‘the dance of gods’. Rooted in the indigenous animistic religious beliefs, this performing art tradition relies on narratives that are elaborated through a combination of singing, chanting and dancing. Each character in the narrative is a representation of a deity; the costume and appearance of the character follow ritualistic prescriptions that have been followed for years. A three dimensional sculpture in motion, the entire costume shows the influence of the region’s sculptural art forms. Lightweight materials such as the wood from the areca nut palm and bamboo are used in the construction of the frame of the most significant accessory, the mudi, headgear, as well as for the lower garments. Coconut tree wood and areca nut palm wood are used to make ornaments. Areca nut wood is also used for making marmula, breastplates, for female performers and the masks generally worn by those characters considered fierce. The Theyyammudi, headgear, is heavily ornamented, but lighter in weight, as it is made from the wood of areca nut palm and bamboo. Tools  are uli/ chisels; vallamitti / flat chisels;  arani / files; alavattu / marking tool; compass and bow drill.