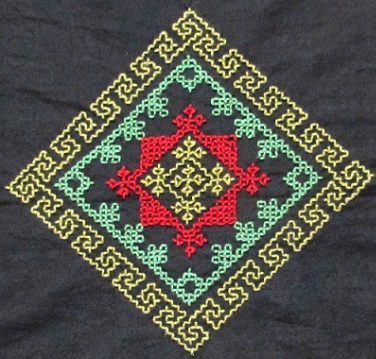 Kasuti embroidery is believed to have originated from north Karnataka where it was developed mainly within the Lingayat community, from where it eventually spread across the region. With literary references dating back to the 15th century, this women’s art was used in textiles related to rites of passage from childbirth, weddings, and other festivities. Worn by the Lingayat bride, it was also considered the most auspicious gift for an expectant mother. Customarily, the Kasuti would be embroidered on the traditional Ilkal sari, accompanied either by an embroidered blouse or one made-up in Khun/Khana material. The embroidering of Kasuti also extended to daily wear, household items, and domestic animals. In fact an unusual Kasuti embroidered bull-trapping or Nandi-jhul collected by Kamaladevi Chatopadhayay, can be seen in the collection of the Srinivas Malliah Memorial Theatre Crafts Trust in Delhi

Kasuti’s wide motif directory remains deeply rooted in Shaivite temple iconography with some well-known motifs including linga, gopura/temple-tower, ratha/temple-chariot, temple-tank, rudraksha beads, lamps, flowers like the lotus, creepers and flower-pots, birds and beasts including the elephant, the swan and the peacock, besides other motifs.

Kasuti embroidery is executed by counting the threads of the weft and the warp of the base textile. The embroidery stitch being mirrored on both sides with no front or back as knots are not used either at the start or at the end of a pattern.  The stitch is placed vertically, horizontally or diagonally to form a composite pattern unit. Comprising of four main stitches – the muragi/ zigzag running stitch; the gavanti/double-running stitch; menthe/ cross stitch and the neygi/ darning stitch. Menthe, from the vernacular for the fenugreek seed, being the stitch used as filler for the background parts of the design.

Kasuti embroiderers are known for their meticulous attention to detail and stitch, their understanding of the motif directory, a finely tuned aesthetic, and a meditative patience in executing their work. 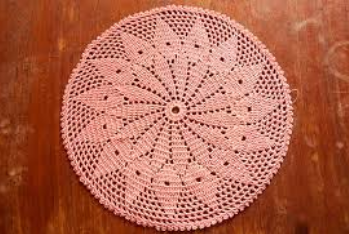 Lace and Crochet Embroidery of Pondicherry 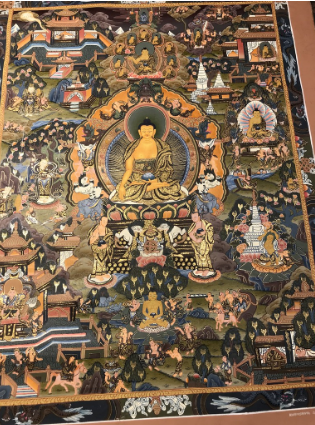