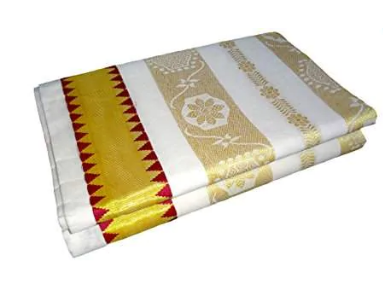 Kasavu is a cream-colored handwoven saree with a gold border worn by Malayalee women. It is a hand-loomed material with intrinsic borders saturated in the shade of pure gold. This sari is considered very auspicious for women in Kerala, particularly during the Hindu calendar new year. Kasavu and Mundum Neriyathum are two other names for the sari (Nereyathum).

Kerala Kasavu, originally known as ‘Mundum Neryathum,’ dates back to the Buddhist period. Gradually, the essence of this ethnic cloth spread to the southern parts of India, becoming particularly prevalent in Kerala. However, the fabric’s design derives its original essence from the Graeco-Roman culture known as “Palmyrene.”

Until the 1970s, this attire was not worn as a traditional sari because the pallu was not thought to be something that had to be draped as an upper garment. Today, the golden borders have been replaced with zaris of various types and colours, and the work and crafts that reflect traditional culture are now designed in the essence of Resham. Designer blouses have also replaced regular Kasavu blouses. 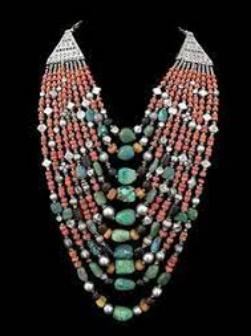 Jewellery and Jewelled Objects of Ladakh