Jewellery and Jewelled Objects of Ladakh

The jewellery of Ladakh is unique and distinctive, bearing links to its regional history. It is mainly for personal ornamentation and is very common among both men and women. Ear ring are worn by both sexes with the men occasionally wearing only one. Like the dejihor worn by Kashmiri Pandit women, the Ladakhi women wear an ornament called sondus or branshil, a marriage symbol fixed on the left shoulder. It has a few gold or silver discs connected by a number of long silver strands and is given by a mother to her daughter at the time of marriage. Ladakhi women wear an extraordinary head dress called perak, which has between 20 and 200 large turquoise and other stones set across a wide leather piece. It begins below the forehead, goes over the head, and extends down the wearer’s back to below the waist.

The love for jewellery and the skill with which stones, gold, and silver are transformed to ornaments shows the high level of imagination and dexterity of the craftspersons of Jammu and Kashmir. Rural men and women in Jammu and Kashmir wear huge circular ear rings locally called kundalas. Large anklets called nupura are worn by women in Jammu, while in the Rajouri region a silver cap or crown known as chaunk phool is worn on the head under the veil. At the time of their marriage, Kashmiri women wear a crown of silver or gold called taj, fashioned like a peaked tiara. Some fine specimens of bridal jewellery can also be seen in Jammu — the tika worn on the forehead, the nose ring called balu, and a fine gold filigree wrist ornament called band. A traditional jewellery article called halqaband, made usually in silver and gold and sometimes in brass is a trail of interlocking sections joined together with thread. In Kashmir, it is worn like a tight choker and has rubies, emeralds, semi-precious stones and even mirrors studded on it. There is another kind of halqaband meant essentially for the rural women, made of white metal and brass. The dejihor, a symbol of marriage, with religious connotations, hangs from the upper portion of the ear and is worn by every Pandit woman. Gunus, a thick bangle of solid gold and silver with a snake or lion head at the two ends is popular even today.
Srinagar is the centre for precious and semi-precious jewellery. The craftspersons usually buy old pieces of folk jewellery in exchange for more modern designs. While most jewellery is customised, some cheap halqabands, bracelets, hair clips and tawizin brass or white metal with glass or semi-precious stones are kept for sale to the rural population. Jhulaka mohalla in Jammu city has goldsmiths who repeat traditional designs of jhumkas and naths for local use.

Kasava/White and Gold Sari of Kerala 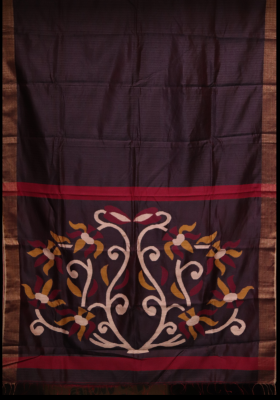