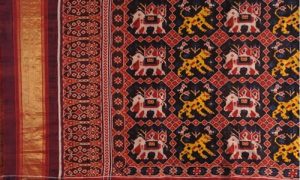 The marvelous and striking Odishan (Orissan) made from cotton and silk ikat is known as bandha. These generally include ikat motifs of flowers, stars, fish and large motifs depicting elephants and parrots. Apart from these zoomorphics, abstract patters are also made such as the wave and geometrical patterns. At times bandha ikat is produced with brocades to give a metallic finish that makes the borders glimmer. This kind of pattern is mostly produced in Sonipur, Gujarat. Dyes of colours such as magenta, red, yellow, green are used to match with the ikat pattern.