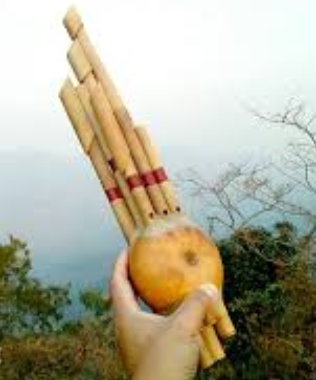 Accessories and Musical Instruments of Mizoram

It is said that the hills of Mizoram are alive with the sound of music. This strong sense of music and song of the Mizos has manifested itself in locally made musical instruments. One of these instruments is the ting-tong, a one-string Mizo musical instrument, which is very popular and commonly played, while some others like the traditional mithun horns, gongs and drums are only occasionally used.

Preferences are changing, the guitar, locally made, is now very popular with the younger generation. Other string instruments include : Tingtang – This is Mizo guitar. Mizo tingtang is a kind of fiddle or violin having only one string. A piece of bamboo shaft is fixed in the gourd to carry the string made of Thangtung, the fibre of the Malay Sago palm. The hollow gourd is cut open and covered with a dry bladder of animal.
Lemlawi is the family of Jew’s harp but the shape and size are different. It is made of small pieces of bamboo. From the piece of bamboo, the craftsman took out a small portion with knife for its string. Tuium dar – It is made of bamboo having three strings producing three different notes. From the outer covering of the bamboo, three pieces of cane like strings are curved out.

Other Mizos instruments like the benz bung and the rewchhem (a long pipe) are no longer being used and very few Mizos know how to play them. Traditional ornaments of Mizoram include the thihus, a necklace with big amber beads, the thifen, a necklace with smaller beads, and the darthi, a necklace of glass beads. On special festive occasions Mizo women use a head gear called the vakiria. It consists of a bamboo band bedecked with a feather and decorated at the ends with beetle wings.