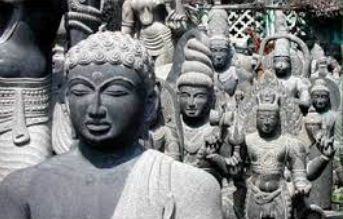 Granite is easily available in Tamil Nadu and a large number of temples are carved of this stone. Pallava stone carvings which show a high degree of skill and craftsmanship evolved in the 6th century and the rock-cut caves of Mamallapuram, stone rathas/chariots and the stone shore temples are part of this expression.

Great stone temples and carvings also date from the Chola period: examples of these are the Brihadeshwara temple at Thanjavur with its numerous carvings, the temple at Gangaikondacholapuram, the Airavathesvara temple at Darasuram and the Kampahareshvara temple at Thribhuvanam.

Other examples include the Chidambaram temple with its 108 karanas of the Natya Shaastra/the canon of dance. the Ekambareshwara and Varadaraaja temples of Kanchipuram, the Meenakshi temple at Madurai, with its numerous sculptures, magnificent proportions, thousand-pillared mandapas, pillars of stone, towering gopurams/towers, larger than life sized reliefs and the long corridor of the Rameshwaram temple.

Granite images have been essential for the construction of the fixed consecrated icons. The artisans around Mamallapuram chisel great blocks of granite to produce massive pillars as well as small icons. Stone carving is also practised in other parts of Tamil Nadu like Thirunelveli, Ramnad, Madurai and North Arcot districts. The sculptors belong to the Vishwakarma or Kammaalar community.

The Shilpa Shaastras or the treatise on crafts detail the measurements and techniques of sculpting, the quality of stone, its maturity, texture, colour and so on. The stone used by the sculptor is hard so that it does not lose its shape easily or chip unexpectedly. The stone should have no flaws or kalanga (stain), rekha(patch) or bindu(spot). The tools used by the sculptors are made of mild steel in various sizes. To prevent the stone from cracking from the vibration of the instrument, the image is always carved with the stone laid flat on the ground whether the posture is seated or standing.

After the figure has been carved, a ceremony called nayanonmilan is conducted and the figure gets sight, life and breath and becomes a living force. Then it is ceremoniously placed in the garbagriha or sanctum sanctorum.

Clay and Terracotta of Punjab 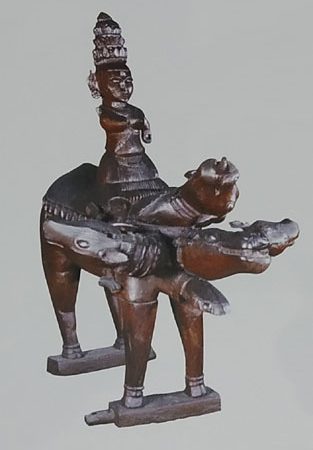