The art of nakashi is supposed to have been brought to India by Mughal emperors who brought Usta artists (those who do the delicate and meticulous nakashi work); the craft flourished in imperial courts under the Mughal emperors. It became popular in the state of Bikaner when the Raja of Bikaner, Raja Rai Singh, secured permission from Emperor Akbar to take some of the Usta artists to Bikaner. The Junagarh Fort in Bikaner stands testimony to the enchanting artworks created by these artists: the Anup Mahal in the fort is resplendent with golden lacquer work, spun into delicate floral, bird and animal designs. The Chandra Mahal and the Karan Mahal also depict examples of nakashi work. Since the critical requirement for nakashi work is a clean and smooth base – walls, pillars and ceilings are decorated with these glowing golden motifs, often set against detailing in radiant colours.

According to the nakashi artist Mohammed Haneef Usta, during the time of the British in India, nakashi work on camel leather became popular. Camel hide was light and unbreakable, and camel-hide saddles and bags (especially as containers for water, since they were easy to transport without breaking) became common bases for nakashi work in this desert kingdom and adjoining areas. These water bottles/containers called kupis – ornately decorated with nakashi work, much in the style of the tradition of ornately decorated camel-leather saddles – were popular in Rajasthan, particularly in Bikaner. Their utilitarian value, quite apart from the exquisite artistic tradition they represent, has meant that they continue to be made till today.

The History of Leather Work
Leather work is an old craft in India, that began as a cottage industry, and continues, in large parts, as such. The fact that India has a very large livestock population has contributed in no mean way to the prolific output and continuity of this craft. Leather work as a cottage industry functioned with different groups performing different roles in the preparation of the leather, and in crafting products from the prepared leather. The work ranged from flaying dead animals, to tanning, and stitching. Since handling carcasses, tanning and working with leather were not considered jobs worthy of the high castes in the traditional Indian caste hierarchy of Brahmin, Kshatriya, Vaishya and Sudra, these tasks came to be performed by those lowest on the caste rung, the Sudras and tanning is traditionally the preserve of the Chamars.

Though hides of different animals are prepared differently, a basic, traditional process of preparing leather involves the following steps:

The creation of kupis, a striking example of nakashi work on camel leather involves the following steps.

Moulding the Camel Hide
Making the clay mould: Clay moulds of the desired shapes are made. The clay mould is made of three materials locally available in Bikaner which are – Soft balu rait (sand), meetha chuna (lime), used for drying and hardening and pilli mitti (clay) that acts as a base.

These three items are mixed in equal proportion into a dough-like consistency. The mixture is filled into lubricated metal or plaster moulds. These are dried, and the component parts of the desired mould are joined together. The surface is covered with a paste of meetha chuna  (lime) to deal with cracks. The completed mould is then dried for a day, after which it is given to the duffgar to mould the leather on to it.

Usually the inner hide of a camel is used. This hide, preserved in salt, is bought in bulk by craftspersons from a local leather dealer. The craftsperson cleans, dries (a three to four day process) and stores the hide. The raw leather to be used is softened, usually by soaking it in water overnight. This makes it pliable. It is then cut and stretched over a clay mould of the desired form that has already been prepared. The joints in the mould and the ends of the stretched leather are joined by using a paste made from boiled and crushed (fenugreek) methi seeds. This is then dried in the sun for at least 48 hours before the mud-based frame inside can be removed. When the leather is set, the clay is removed; while some artisans use a hammer and mallet to knock out the clay, George Watt’s catalogue and Kamladevi Chattopadhyaya indicate that the clay is washed out.

Preparing for the Nakashi Work
Nakashi work can only be done on a smooth and clean surface. After a smooth surface has been prepared (in this case, the body of the kupi bottle), the design or pattern is made. The design-making process is known as akbara. The designs are first made on paper. The outlines of the patterns are punched on the paper with pins thrust along the tracery of the designs. The design is then traced on the paper using indigo or black coal power, which filters through the pin-holes on the paper and traces the outlines of the intended design on the leather.

The Process of Nakashi Work
The manouat is done over the akbara, and creates an ’embossed effect’ on the desired pattern. According to Kamladevi Chattopadhyaya, the portion to be ornamented is raised by repeatedly applying a special preparation of shell powder mixed with glue and a kind of wood apple. Alternatively, sand from an earthen pot is mixed with glue and jaggery to create the required paste. The mixture is so fine that it does not even hurt the eyes if it enters them.

The embossed surface is then painted upon. Usually a colour called paveri is applied first. Then, a colour made from sindur and rogan is applied. Rogan is prepared by adding chandrush and linseed oil and heating it. Bat is then applied to the areas where gold is to be patched. At a particular consistency of bat, gold is patched over it. Detailing follows – this is done by inking (sihayi) with a sable-hair brush. The remaining surface is filled with different colours. As a particular surface rises it is painted in gold and other colours while the base is coloured black or red to contrast the shapes that stand out.

The motifs in nakashi work are linked closely to Mughal period. In depiction, they closely follow a style of Mughal miniature paintings – especially court paintings – hallmarks of which include acute detailing, intricate designing, a superbly deft use of colour and line, and a very ornate effect shot through with gold work. The patterns created are also distinctly Mughal, and are closely allied with relief detailing in the ornate aspects of Mughal architecture.

Types of Work
Nakashi ornamentation involves a versatile combination of gold work, with enamelling colours and minakari. It is, in its basic form, miniature work, intricate and rich in look and texture. According to Mohammed Haneef Usta, there are different types of nakashi work:

Motifs
In nakashi work on camel leather, floral motifs are paramount in the artwork done on kupis, saddles and lampshades. Bird and animal figures are also present. There are some standard forms of laying out patterns, as described by Mohammed Haneef Usta. These include:

Traditional items involving nakashi work on camel leather include a range of products from kupis to lampshades. According to Mohammed Haneef Usta small kupis and surhahis decorated with a little nakashi work cost about Rs 200-350, while those with more detailing and ornamentation cost between Rs 500 and Rs 1,500. Lampshades are priced according to size – small, medium and large. Small lampshades usually range in price from Rs 4,000 to Rs 6,000; medium-sized lampshades are usually between Rs 8,000 and Rs 14,000/15000; and large lampshades often start at a base price of Rs 15,000. The price naturally varies with the amount of detailing and the intricacy of the design. The amount of gold used also affects the price, with gold foil being more expensive than chemical gold paints.

Since the critical requirement for nakashi work is a clean and smooth surface as a base, along with camel hide, wood and marble are also being used as base surfaces for nakashi work. Thus wooden containers with nakashi artwork can be found, as can wooden photo frames with the same gold lacquer work. In a contemporary variant, work similar to nakashi is also found in modern buildings where the embossing is done with a cement primer, and the decorations are made using enamel paint, and finished with varnish. 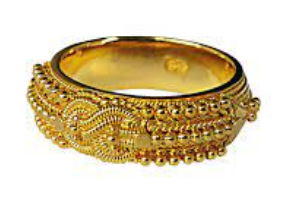