Games are a common passion, a common pastime which cross all sections of the community. Playing or watching games form a highly significant aspect of culture, both because of their importance in peoples lives and their capacity to bring families and communities together and because of the degree of creativity and skill that go into devising them.
No indoor games match the passion with which cards are played in India. One such card game, now facing extinction is Ganjifa
The leading theory is that the Ganjifa pattern was created in Persia, most likely under the influence of playing cards from the East (probably money-suited decks), and introduced in India by the Mughals. The origin of the term Ganjifa is obscure. Ganj is a Persian term meaning ‘treasure, treasury or hoard’.
The first mention of the game is made in the Babarnama, the memoir of Babar. The founder of the Mughal dynasty, Emperor Babur, who ruled from 1526 to 1530, reports in his annals, “This evening… Mir Ali Korchi was dispatched to Tatta [in Sindh] to Shah Hussain. He is fond of the game with cards and had requested some which I have duly sent him.”
The Ganjifa are made in Bishnupur, Bankura district of West Bengal. These are very similar to the Ganjappa cards of Orissa. The cards have, painted on them, images and symbols representing the ten incarnations of Lord Vishnu, the Dashavatar. Apart from this, the ten rupas or forms of the Mother Goddess, Sati; or Dasa Mahavidya may also be illustrated on these cards. However today these cards are primarily made on specific orders, hence the illustrations may change to meet the demand.
Under the royal patronage of the Malla dynasty of Bishnupur, this game had become famous. It is believed that the designs of the cards have not changed in the slightest in the last one thousand years. Dashavatar taas are made in packs of eight or twelve suits. What was once a popular game is now archaic and valued more as an antique.
The Dashavatara taas generally consists of 120 cards instead of 96 of the Mughal set, and in Bishnupur unlike the other States it is played by five players. The names of the suits of this Dasavatara ganjifa are Matsya (fish), Kurma (turtle), Baraha (boar), Nrisingha (a combination of man and lion), Baman (Brahmin dwarf), Parasuram (the sixth incarnation with axe), Sri Ram (the hero of Ramayana), Balaram (brother of lord Sri Krishna), Lord Buddha (the ninth incarnation with absolute peace) and Kalki (the ‘abatar’ yet to come

Every suit of a Dasavatara pack consists of 12 cards each with a Raja as a king or
an upper court card and a Mantri as a minister or a lower court card along with ten
general numeral cards. These suits can be identified by their symbols.
The Matsya suit symbolized by a fish, Kurma by a turtle, Baraha by a shell, Nrisingha by a chakra or disc, Baman by a water pot, Parasuram with an axe, Sri Ram with an arrow or a bow and arrow or a monkey, Balaram with a plough or club or cow, Lord Buddha with a lotus and Kalki with sword or horse or a parasol.

Besides the Dashabatar pack Bishnupur is also known for its Naqsh Taas popular with its stylized patterns and shapes. The Naqsh taas pack consist of 48 cards with 4 equal suits of 12 cards each. These cards are generally produced in two different sets-one large and the other a miniature deck of 2? of diameter. These miniatures are created with detailed and minute attention and precision. Additionally the box containg the cards is equally detailed and elaborate in design and patterning.

The process of making the cards is laborious and involves almost all the members
of a family to make a a single set. The Bishnupur Dashabatar Taas are made from old cloth pieces pasted one on top the other tamarind glue which are layered and pasted. After pasting layers after layers the stiffened piece of cloth is stretched, dried and cut into cloth roundels, which are 4-5 inches in diameter. Once they are dry, the designs are painted on white backgrounds with the artist painting on the details of figure cards and the numeral cards. . The back is left plain and unpainted. Due to the increase in the price of natural colours, the cfatspersons now prefer to use water colours

With the introduction of European printed cards in 19th century the play with the Dashabatar Taas declined. Now the cards are created not for players
but for tourists and art-lovers. With the decreasing demand and the lack of
interest and awareness the Dashabatar Taas their art and the play is in need of urgent safe guarding with only the Fouzdar family of Bishnupur still engaged in creating the traditional Dashabatar ganjifa and Naqsh taas 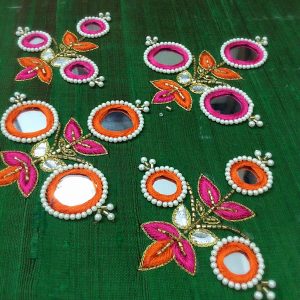