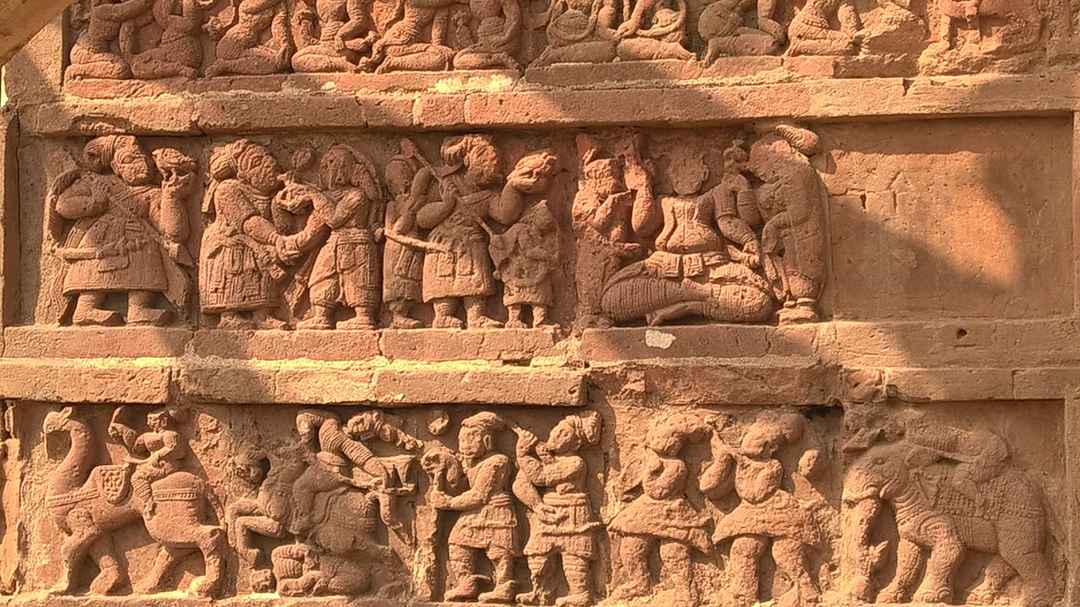 Clay and Terracotta of West Bengal

Bengal offers some of the finest examples of terracotta panels in the temples of Murshidabad, Birbhum, Jessore, Bansberia (Hooghly), and Digha. The style is folk and the designs are expressive with a good amount of relief work, and a play of light and shadow.
The traditional potters of West Bengal belong to a caste known as kumbhakars or pot- makers. The exceptions are the Muslim potters at Murshidabad. The clay is sourced from river beds, ponds, pits, and ditches. Clay from two to three sources is mixed together to get a better clay body. The fuel used to fire low-temperature pottery is twigs, dry branches, leaves, and locally collected firewood. Open pit kilns are used which are efficient and inexpensive and can afford a temperature of 700 to 800 degrees celsius. The pots are arranged in layers with leaves, twigs, or cow dung cakes in between, which is then covered with rice straw and loamy soil. Firing takes four to five hours. The other kind of kiln used is shaped like a local bamboo winnowing tray, semi-circular at one end and extending at the diameter in the form of a flat, shallow slope with a rounded opposite side. This is deeper than a round kiln. These kilns are larger and are used for firing larger pieces at temperatures higher than 800 degrees celsius. Other than the kiln and the wheel, the tools used by the potters include hand tools made of bamboo, wood and iron.
The women in the kumbhkar families do not throw the pots on the wheel; they make beaten bottoms of round pots and solid clay toys and dolls. This is because only the necks and upper halves of round bottomed pots are made on the wheel. Women finish, decorate, and paint the pots. Figurines of the goddesses Shakti, Lakshmi, and Saraswati, and the abstract figure of Lord Jagannath, Lord of the Universe, are made and worshipped; these are either solid or made using burnt clay moulds. Large images of goddess like Durga and Lakshmi, as well as of other gods, are modelled on straw armatures and left un-burnt. The womenfolk of Shankhakars in Bankura district make primitively formed ritual figurines in burnt clay. Pottery centers in Calcutta and the Sunderbans specialize in storage pots — these are as high as 2 metres, with a diameter of 1 meter.
The potters of Bengal make a variety of other products also. Manasha ghat is a ceremonial pot symbolising the folk goddess, Manasha, queen of the snakes and Manasha chali, intricately decorated, also represents Goddess Manasha. In the manasha chali, individual component are thrown on the wheel in large quantities, and are then assembled. Smaller figures are modelled by hand. Figurines used for wish fulfillment and recovery from serious illness include horses, elephants, tigers, monkeys, and other animals, real and imaginary. Semi-abstract terracotta human heads symbolise forest gods. They are made by throwing parts on the wheel; the parts are assembled later. The ritual horses of Bankura, Purulia, Midnapore, Maldah, and Paschim Dinajpur are well known. Glazed pottery ware is restricted in West Bengal to semi-porcelain tea cups and saucers. Otherwise it is the un-glazed pottery ware that predominates. Terracotta is important in the rural areas of West Bengal, notwithstanding the availability of substitutes, mainly because of the demand for clay water pitchers (which keep the water very cool), for mangers or clay feeding bins for the cattle, and for clay pots to make parboiled rice. Ceremonial and ritual items are still made of clay. Items like tea mugs, plates, tumblers, and bowls of different sizes, beautifully shaped clay ware dahi (yoghurt) pots, and many other items that are thrown away after use are always in demand.
Kumbhkar potters and sutradhars or carpenter-carvers combine forces for crafting the terracotta decorations in temples. Most temples in West Bengal were decorated with terracotta plaques in several unique styles. Kumbhkars prepared semi-hard blocks of plastic clay on which the sutradhars carved with small and thin chisels. Potters dried and fired these. Sutradhars carved repetitive designs in reverse on wood or semi-hard clay blocks (burnt by potters after drying). These were used as press moulds by less skilled helpers and the finishing in a semi-hard condition was done by the sutradhars in a carving style that matched the other carved panels used. Terracotta decorations were used dominantly on the temple front. These temples are found in Bankura, Murshidabad, Hooghly, and Nadia districts. The terracotta figures of the 16th and 17th centuries are powerful and pulsating with rhythmic vitality. Faces are in profile and limbs are beautifully oriented in the overall design.
The patterns of decoration in most of the temples were the same. The lower area of the walls depicted temporal themes. Above that, the designs included scenes from the lives of Lord Krishna and Lord Rama. The themes depicted above the arch were scenes from the Ramayana and the Mahabharata, including scenes of war. The ten incarnations or avataras of Lord Vishnu would be depicted in smaller panels on either side, illustrating a single episode relating to them. Large panels depicting devotees of Radha and Lord Krishna dancing and singing to the rhythm of khol, drums and cymbals can be seen. Other themes —- the lives of saints and savants with scenes from contemporary social life — were found on small plaques. 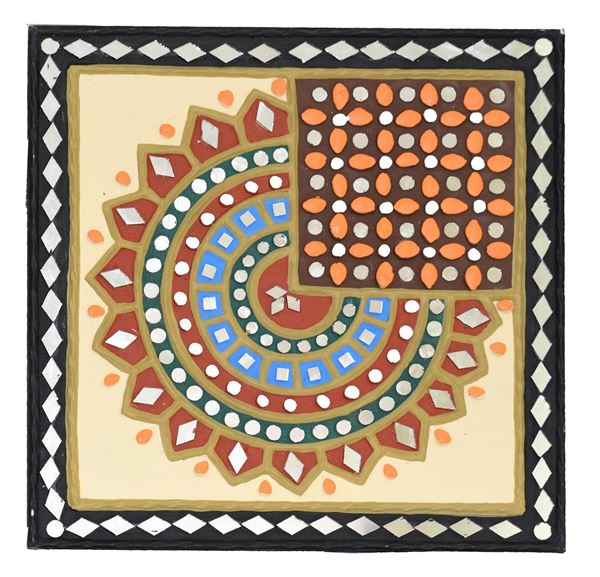