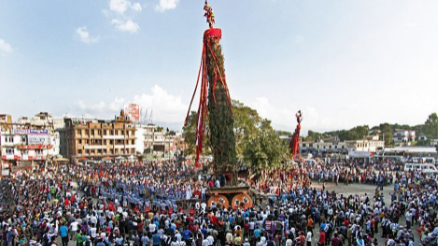 The three-day Rato Macchindranath Jatra is one of the largest chariot festivals in Kathmandu valley Honouring Machhindranath, the god of Rain.  Rato Machhendranath translates to “Red Machhendranath,” referring to the colour of the god’s image. The dates of the festival are decided according to the lunar calendar. The chariot procession was started to celebrate Bunga Dyah’s arrival in Nepal and the end of a crippling drought. It began during the reign of Narendra Deva (640-683 AD).

The festival’s preparations begin with the installation of a 60-foot-tall chariot. When the chariot is completed, an image of Bunga Dyah from his temple is placed inside. Revellers then pull the chariot through the streets of Lalitpur for a month-long journey. Bunga Dyah‘s chariot is followed on the journey by a similar but smaller chariot of Chkuw Dyah. On the stretch between Iti and Thati, the chariot is exclusively pulled by women. This part of the chariot procession is caled Ykah Misy Bhujy. The festivities culminate with the Bhoto Jatra ceremony, which features the presentation of the bhoto, a traditional Nepalese vest.

Clay and Terracotta of Chattisgarh