In the high altitudes of Himachal Pradesh, sheep and goat rearing is a very common occupation for many villagers who are involved in blanket-weaving and felting. The Giabong and Kulu valleys are the main areas for gudma, the local name for a fleecy, soft, and heavy blanket which is woven by the local villagers in natural colours and finished with a warm red or black trimming. Mattresses locally called kharchas are made of woollen yarn derived from goat’s hair. Numdha, a craft fairly new to Himachal Pradesh involves felting the wool and ornamenting it with colourful embroidery threads. The carpets of Himachal are rich and captivating in design and durable in texture. Dragons borrowed from the neighbouring country of China and the Hindu swastikas are popular motifs which get incorporated in these carpets. Many Tibetan craftspersons are engaged in weaving woollen carpets in the villages of Bhuppur, Puruwala, Sataun, and Kamsan in the Paonta block of Sirmur district. The cold climate in the hills in this region makes the carpet an item of daily use. The patterns woven are mainly geometric and blocks of colour are used in the patterns. Threads of ground colours are used; they are cut off when a new motif or design has to be introduced. The weaving is a combination of cotton and wool and it is done by women. Bhutias are traditional weavers who make common bedside carpets called duns with 60 knots to a square inch. Asans, with squares to sit on, are also made. The motifs are inspired from alpana or rangoli designs drawn on the floor during festive occasions and they are geometric or floral. Mythical Tibetan birds called dak, jira, dragons, lions, and the god of lightning are common motifs. The Central Asian influence can be seen in the presence of the famous key and swastika designs. Chali is a coarse carpet found in Lahaul which is a remote mountainous area in the far north. Kinnaur in Himachal pradesh is noted for its fine weave. The residue wool left after the material for pashmina shawls has been taken is used to weave a rough yarn called sheli from which carpets — called karcha, chuktu, and chugdan — are made. Black and white carpets are woven from a mixture of sheli and bakratha, another kind of goat’s wool Thobis are black and grey carpets made from goat’s hair at Pangi in the Chamba district of Himachal Pradesh. The motifs found on these carpets are the trishul (trident), the swastika, and an eight-pointed design made of a combination of a diamond and a concentric circle. Although wool carpets are predominant in the region, a wide range of cotton dhurries are also made. The main colours used are red or blue, and the design comprises usually of stripes. Weavers of Sirmur use pit-looms. Varying effects are produced by using yarn of differing thicknesses, thin for the warp and thick for the weft. 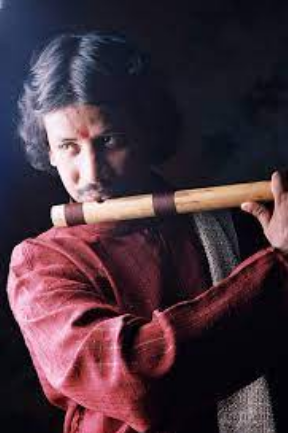 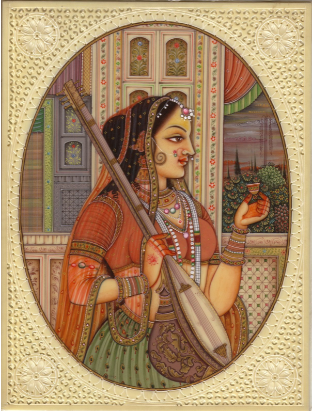 Miniature Painting on Wood of Rajasthan