Cane and Bamboo of West Bengal

Mutra cane is the raw material for shitalpati and it grows mainly in Cooch Behar. This is kept soaked in water for 24 hours and is then cut into strips to make the pati. Some of the strips are dyed magenta in colour to make patterns. Shitalpati is woven with flat strips in simple checks, twill, zig-zags, diagonals, diamonds, and many other designs, and the motifs woven in the mats are stylised human, animal, or leaf designs mainly in magenta, using the extra weft technique. Cane is also used to make baskets. Traditional shapes like the dhama, dhami, and katha are made. Cane baskets are made with a species of thin cane found mainly in north Bengal. The core material is a whole cane twisted into spirals which curve out gracefully from the base to the rim. The cane is stitched together in simple lines with thin strips of the cane itself. These are very sturdy and are used to carry heavy loads of grain. The cane baskets with a heavy plaited weave are used all over West Bengal to carry head loads of bricks and stones.
Bamboo, used mainly for basketry, grows abundantly in West Bengal. Craftspersons sometimes have their own bamboo groves adjoining their huts. The variety of bamboo used for basketry has long fibres and widely-spaced internodes. When the bamboo is solid and thick and has close nodes it is used for construction. In north Bengal a thick but hollow variety is flattened to make the wall panels of village huts. Bamboo containers — which are smoked to a brown shade, decorated with poker work, with designs burnt in with a red hot point of a steel tool, bound by strips of cane, and fitted with cane handles — are used to store, carry, and measure oil and milk in many parts of north Bengal. In the hill regions, bamboo lengths are halved, the nodes are removed, and these are used as aqueducts to carry water.
The bamboo strips used in basket weaves are flexible and their width determines the appearance of the basket. Paddy bins or containers for storing paddy are usually made of bamboo matting. These are large and have a graceful waist with a cylindrical shape which is the basic structure of the bin. The bamboo which is used for this is slatted, and seasoned by soaking it in a mud bed for three to four weeks. 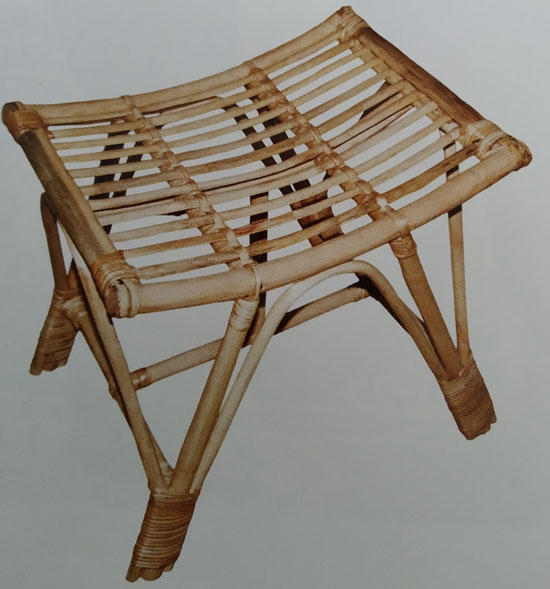