Cane and Bamboo of Tripura

Craftsmanship in Tripura is a unique blend of styles practised by different tribes and communities belonging to diverse religions. In its weaving, too, the region shows a similar fusion of styles, where the traditional patterns have meshed with Manipuri and Bengali styles brought in by craftspeople from these regions who have settled in Tripura. There are 12 major species of bamboo used in the region and each region and every tribe has its own use for the plant. The tribes, with a rich and varied culture, belong mainly to the Riang, Chakma, Halam, and Usai communities. The majority of tribals live in elevated houses of bamboo called ‘tong’.
The cane and bamboo handicrafts of Tripura are known for their elegance and exquisite designs. Bamboo is used to make furniture, panelling, mattresses, baskets, lamp shades, bags, moorahs, baskets, vases, mugs, pencil holders, tablemats, and other mat products. The tribes of the Northeast use baskets to transport and store a wide range of goods for day to day living — firewood, water, chickens, grains, ornaments, and thread. A very high degree of skill is required to make the fine and perfectly woven baskets.
Cane and bamboo are split vertically and made into extremely fine and uniform strips, using simple tools. The waxy top layer is used while the inner layer, which is fibrous and rougher than the outer layer, is removed. The bamboo is then stripped down to the required thickness and length. The splits are dextrously woven to form a large array of forms and shapes. Artisans also produce smaller versions of utilitarian items with very fine bamboo splits. These come in an infinite variety of weaves and are exquisite.

In western Tripura men can be seen weaving the kula, dala, and tokri to store vegetables. Winnowing trays and fans are formed by making a mat into the desired shape. Every third strip uses the outer layer of bamboo. Pollo, a fish trap, is made of bamboo splits that are 6 mm by 4 mm in cross section. Sudha is a fish trap used by the Jamatia tribe of Tripura. It consists of a bamboo net suspended from crossed splints. Dulla is a commonly used fish basket. Pathee is a rain shield similar to the Jhapi/japi of Assam. Mats and mat articles like the bamboo ‘chatais’ are also among the well-known crafts of the region. There are different types of roll mats used as door and window screens as well as room partitions.

Jhapi/japi is a rain shield that is made by sandwiching a layer of dried palm leaves between two layers of interlaced bamboo strips. The interlacing is done in an open hexagonal weave. The dried palm leaves make the shields waterproof.

Cylindrical containers that are made of bamboo culms by turning on a hand lathe and carving are new items developed by craftsmen of Agartala. Carving of bamboo roots is a new innovation of Tripura artisans that is used in making sculptures and complex sculpted narratives.The tools used in making bamboo handicrafts are chaku/knife, takkal/broad-bladed knife, haath dao/bill hook knife, files, and chisels. Nowadays, machines are being used for splitting bamboo. 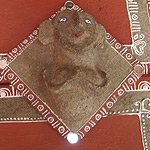