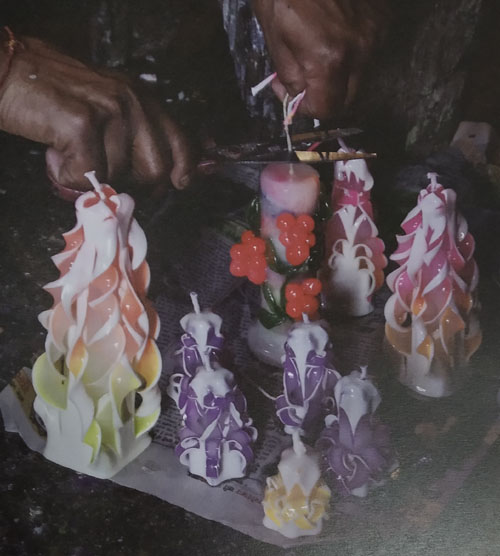 Some households and small wholesale entrepreneurs have been practicing waxwork in Nainital since the 1970s. Various innovations in design and shape helped in enhancing the appeal of candles and statues made by wax. Candles were earlier used for lighting in homes but gradually shifted to decorative purposes in the 1990s as Nainital became a popular tourist destination.

Molten wax is transferred to molds made of different materials such as wood, terracotta and metal. Different grades of wax with varying levels of refinement are used depending on the requirement of the final article. The cotton wick is tied on the base of the mold which is centrally located. The mold having molten wax is immersed in water for ten minutes to half an hour for letting it cool down. The candle is again immersed in water after taking it out from the mold where the excess wick and wax are trimmed off. Sometimes oil is used to lubricate the mold, enabling easy extraction of the candles.

Molds can also be divided into two halves, whereas single molds which cannot be split are used to make large candles. Tall spiral candles were made with an imported German machine. Some candles are either made in different shapes and sizes of molds and some are decorated later by cutting and folding in different designs such as flowers, leaves. Cherry candles, red balls, green leaves and stems are made by artisan with a knife dripping hot wax onto the decoration, for sticking it with each other.

Various decorative candles such as ribbon candles are made by carving. The two ends of the main structure of candle are dipped in two different colors of wax. Before carving, the candle is dipped in a solution of zinc oxide and wax forming a white layer which facilitates the carving process. By using a knife the artisan cuts, twists, drops and folds the edges and sometimes sticks it back to the candle as per the required design. A sheen finish is given to the candle at the end by dripping it in the solution of spirit, acetone, thinner and chandras. 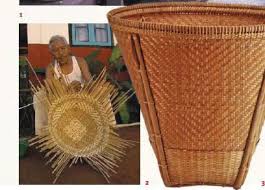