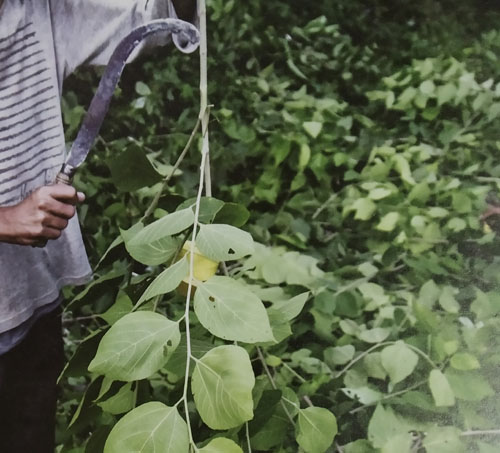 Bhimal is the local name of a deciduous tree species called Grewia optiva. Other vernacular names are bheku, bhekua, and bhimu. The bast fibres of the tree are rough and uneven. These fibres are used to make ropes and good quality paper. The branches of the tree have been used as torches and firewood since earlier times. The thicker branches are used to make handles for small agricultural tools while the thinner branches are woven into baskets. The bark of the bhimal tree produces mucilage which is used to make hair shampoo.

After retting, the branches are thrashed against boulders to loosen the bark and the phloem from the wood. The fibres are washed, dried in the sun and then separated. The dried fibres are called sel. The sel are hand-twisted to make ropes and strings in the rainy season so that the moisture content in the atmosphere makes the twisting of fibres easy. The jyor/thick rope is made of three thinner ropes plied together. Its function is to tie animals, yoke bullocks to the plough, and fasten firewood for carrying. Seenkhand jao are thin strings used for tying vegetable bags.

Sometimes, instead of undergoing degumming initially, the fibres are directly used as strips to tie or wrap bundles and strengthen fences. The bhimal rope is wrapped around a coil of grass to make a potholder. To create textile quality yarn out of bhimal, the fibres have to be softened, carded, and spun. This has not yet been possible as the sel is too dry and weak to be spun into yarn.