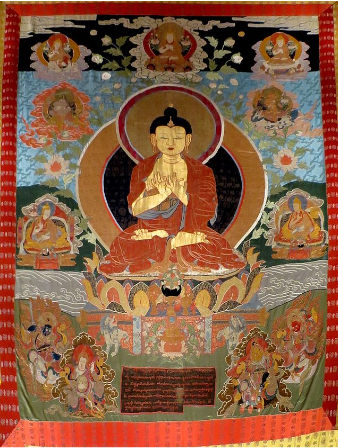 Thangkas, literally translate to scroll. These sacred scrolls are commonly found in monasteries and buddhist shrines of Tibet. Dras-drub-ma, are appliqué Thangkas that serve a similar purpose to the painted Thangka. The difference is that applique thangkas are crafted by stitching together pieces of specifically shaped cloth onto a base fabric, mostly made of cotton or silk. Embroidery is added to this to create the image required. Common images on Thangkas include Lord Buddha encircled by deities or Lord Buddha’s life being portrayed along the branches of the cosmic tree known as the wheel of life, horoscope, etc. These Thangkas are created by only male Buddhists after training in the monasteries in the iconometry and iconography of the art including the colour scheme.

Many people assume that the Thangka painting style was inspired by the Gupta era, which lasted from 330 to 520 A.D. The earliest examples of Thangka can be found in Tibet, dating back to the 9th or 10th centuries. The style and technique are similar to the Indian cloth painting pattas (leaves). The influences of Nepal, Kashmir, and Central Asia can be found in Thangka art.

One of the key reasons for developing the applique technique was to make Thangka painting more durable. When compared to Thangka painting, applique Thangka lasts longer because moisture, dust, and heat have little impact on it while travelling. Applique thangkas were costly due to the use of pure silk fibre and could only be afforded by rich individuals, monasteries, and Chinese imperials.

During Ashoka’s rule in the third century BC, Buddhism became popular in Himachal Pradesh. Many stupas (a hemispherical structure containing ashes of Buddhist monks, used as a place for meditation) were built by king Ashoka, who was a follower of Buddhism. This growth of buddhism attracted monks from Tibet who brought the applique Thangka with them. 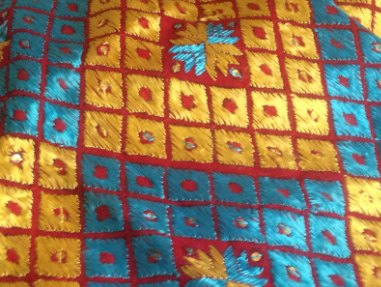